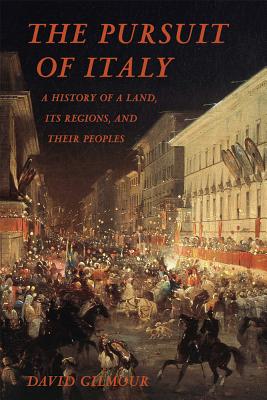 The Pursuit of Italy (Hardcover)

Did Garibaldi do Italy a disservice when he helped its disparate parts achieve unity? Was the goal of political unification a mistake? These questions are asked and answered in a number of ways in this engaging, original consideration of the many histories that contribute to the brilliance-and weakness-of Italy today.

David Gilmour's wonderfully readable exploration of Italian life over the centuries is filled with provocative anecdotes as well as personal observations, and is peopled with the great figures of the Italian past-from Cicero and Virgil to Dante and the Medicis, from Garibaldi and Cavour to the controversial politicians of the twentieth century. Gilmour's wise account of the Risorgimento, the pivotal epoch in modern Italian history, debunks the nationalistic myths that surround it, though he paints a sympathetic portrait of Giuseppe Verdi, a beloved hero of the era. Gilmour shows that the glory of Italy has always lain in its regions, with their distinctive art, civic cultures, identities, and cuisines. Italy's inhabitants identified themselves not as Italians but as Tuscans and Venetians, Sicilians and Lombards, Neapolitans and Genoese. Italy's strength and culture still come from its regions rather than from its misconceived, mishandled notion of a unified nation.

With "The Pursuit of Italy," David Gilmour has provided a coherent, persuasive, and entertaining interpretation of the paradoxes of Italian life, past and present.

Sir David Gilmour is one of Britain's most admired and accomplished historical writers and biographers. His previous books include "The Last Leopard," "The Long Recessional "(FSG, 2002), and, most recently, "The Ruling Caste "(FSG, 2006).

Praise For The Pursuit of Italy: A History of a Land, Its Regions, and Their Peoples…

Praise For The Pursuit Of Italy

“Amazingly compendious . . . The best one-volume history of Italy now available . . . [The Pursuit of Italy] has the same tonic, exhilarating impact as the thigh-slapping overture to a Verdi opera.” —Jonathan Keates, The Literary Review

“[The Pursuit of Italy has] a freshness and readability often lacking in more laborious histories, an attractiveness reinforced by the quality of the writing, which is versatile and vivid and frequently witty, able to encompass both densely factual material and complicated narrative without loss of clarity or elegance . . . Compelling to read and highly informative . . . Brilliantly accomplished.” —Barry Unsworth, The Spectator

“Lucid and elegant, clever and provocative . . . Tracing Italy’s history from Romulus and Remus to the misdemeanours of Silvio Berlusconi, Gilmour develops his thesis with wit, style, and a great deal of learning.” —Dominic Sandbrook, The Sunday Times (London)

“[A] well-researched and engaging canter through the peninsula’s history.” —Peter Popham, The Independent

“[Gilmour is] a witty guide with an elegant prose style and a mind delightfully furnished with anec­dotes and dictums, sensual impressions and conversations . . . [His] prose smells not of the archive but of a convivial meal eaten beneath a pergola in the Pisan hills.” —Lucy Hughes-Hallett, The Daily Telegraph

“In this superb history of Italy and the Italian people, Gilmour celebrates a nation of bewilderingly mixed bloods and ethnicities . . . The Pursuit of Italy offers an enduring tribute to a various and wonderful people.” —Ian Thomson, Evening Standard