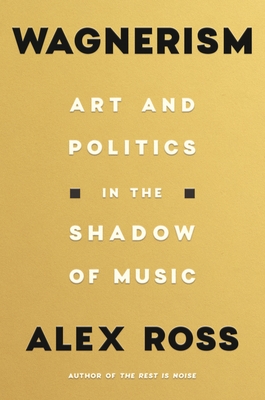 Art and Politics in the Shadow of Music

Alex Ross, renowned New Yorker music critic and author of the international bestseller and Pulitzer Prize finalist The Rest Is Noise, reveals how Richard Wagner became the proving ground for modern art and politics—an aesthetic war zone where the Western world wrestled with its capacity for beauty and violence.

For better or worse, Wagner is the most widely influential figure in the history of music. Around 1900, the phenomenon known as Wagnerism saturated European and American culture. Such colossal creations as The Ring of the Nibelung, Tristan und Isolde, and Parsifal were models of formal daring, mythmaking, erotic freedom, and mystical speculation. A mighty procession of artists, including Virginia Woolf, Thomas Mann, Paul Cézanne, Isadora Duncan, and Luis Buñuel, felt his impact. Anarchists, occultists, feminists, and gay-rights pioneers saw him as a kindred spirit. Then Adolf Hitler incorporated Wagner into the soundtrack of Nazi Germany, and the composer came to be defined by his ferocious antisemitism. For many, his name is now almost synonymous with artistic evil.

In Wagnerism, Alex Ross restores the magnificent confusion of what it means to be a Wagnerian. A pandemonium of geniuses, madmen, charlatans, and prophets do battle over Wagner’s many-sided legacy. As readers of his brilliant articles for The New Yorker have come to expect, Ross ranges thrillingly across artistic disciplines, from the architecture of Louis Sullivan to the novels of Philip K. Dick, from the Zionist writings of Theodor Herzl to the civil-rights essays of W.E.B. Du Bois, from O Pioneers! to Apocalypse Now.

In many ways, Wagnerism tells a tragic tale. An artist who might have rivaled Shakespeare in universal reach is undone by an ideology of hate. Still, his shadow lingers over twenty-first century culture, his mythic motifs coursing through superhero films and fantasy fiction. Neither apologia nor condemnation, Wagnerism is a work of passionate discovery, urging us toward a more honest idea of how art acts in the world.

Alex Ross has been the music critic of The New Yorker since 1996. His first book, the international bestseller The Rest Is Noise: Listening to the Twentieth Century, was a finalist for the Pulitzer Prize and won a National Book Critics Circle Award. His second book, the essay collection Listen to This, received an ASCAP Deems Taylor Award. He was named a MacArthur Fellow in 2008 and a Guggenheim Fellow in 2015.

Praise For Wagnerism: Art and Politics in the Shadow of Music…

“Wagnerism is as magnificently realized as it is monumentally ambitious, a cultural history of the modern world that Richard Wagner and his protean art helped mightily to create, and equally a brilliantly synthetic mapping-out of the infinitely multiplying, antagonistic and cross-pollinating readings and misreadings, transformations and transmogrifications that the world has wrought in its unceasing, ongoing grapplings with Wagner. Alex Ross has assembled a vast convocation of the artists, proponents and prophets of realism and hallucination, psychology and mythification, avant-gardism and populism, democracy and fascism, cosmopolitanism and racism, and collectively they offer us an epic account of the progress of modernity through mazes of aesthetics, ideology and consciousness. It’s a journey for which Ross is the ideal guide: lucid, astoundingly erudite, scrupulous, generous, profound, objective and engaged, and enormously entertaining.” —Tony Kushner, playwright

“In this epic, extraordinary book, Alex Ross contends with the ‘infernal logic’ of Wagner’s legacy, through the centuries and across poetry, literature, art, philosophy, architecture, politics, war, film. Wagnerism is a hugely exhilarating read, and a virtuoso feat of scholarship and supple writing: Ross is such a companionable guide, connecting ideas so casually and unspooling stories so fluidly that you can almost lose sight of the ferocious erudition that undergirds every page. I can’t think of a better or more profound work about the long, complicated shadow of cultural influence.” —Patrick Radden Keefe, author of Say Nothing

“For those who love Wagner, this book is obviously heaven. But Wagnerism goes far beyond the man himself, using its subject to springboard into a breathlessly entertaining and dizzyingly diverse survey of art, politics and culture over the past century and a half. Ultimately, it’s a book about how humans are inspired by art, and like all of Alex Ross’s writing, it bottles that strange lightning and inspires us in turn.” —Rian Johnson, director of The Last Jedi and Knives Out

“Until now, what I didn’t know about Wagner and his influence on culture could have filled a book. Fortunately, Alex Ross’s brilliant evocation of the composer’s world more than elucidates Wagner’s various mysteries—it gives voice to why and how he came to be such a significant political and aesthetic influence on the world stage. Masterfully written and researched, Wagnerism is itself a masterpiece—a breathtaking achievement.” —Hilton Als, author of White Girls

“Wagnerism is monumental not only in scale but in accomplishment. Wagner casts a vast shadow over modern culture and it takes an incandescent critical intelligence to illuminate this legacy in its full complexity, distorted by neither hagiography nor demonology . . . Afro-Wagnerians jostle with Nazis, Gilded Age feminists share the stage with Zionists, gay Wagnerians consort with modernist litterateurs. The result is a singular achievement of scholarship, sensibility, and storytelling.” —Kwame Anthony Appiah, author of The Ties That Bind

“In this prodigious interdisciplinary opus, encompassing the visual arts, literature, and philosophy, Ross deftly teases out the tremendous and often polarizing impact Wagner’s music and theories had on modern culture and history, parsing those luminaries who celebrated the composer and those who reviled him. In doing so—in this prismatic examination conducted through a Wagnerian lens—Ross underscores a paradox at the heart of modernism itself: the tension between the retrograde and the avant-garde and, thus, the political right and left, themes of even greater relevance in our present times.” —Vivien Greene, Senior Curator, 19th- and Early 20th-Century Art, Guggenheim Museum

“A masterpiece—massive and magnificent. A book I’ve been waiting fifty years to read. It turns lights on in regions where I have bumbled in murk.” —Peter Schjeldahl, author of Hot, Cold, Heavy, Light, 100 Art Writings 1988–2018

“Attention: a masterpiece! Wagnerism is extraordinary for the richness of references and testimonies drawn from literature, philosophy, the visual arts, musicology, the cinema. It is probably the most informed work on Wagner and his aesthetic and cultural significance that I have ever read.” —Jean-Jacques Nattiez, author of Wagner Androgyne