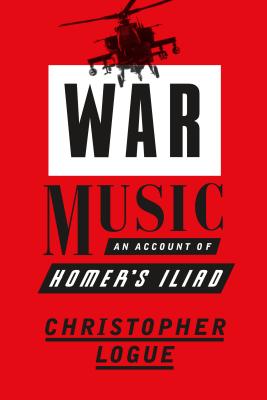 A remarkable hybrid of translation, adaptation, and invention

Picture the east Aegean sea by night,
And on a beach aslant its shimmering
Upwards of 50,000 men
Asleep like spoons beside their lethal Fleet.

“Your life at every instant up for— / Gone. / And, candidly, who gives a toss? / Your heart beats strong. Your spirit grips,” writes Christopher Logue in his original version of Homer’s Iliad, the uncanny “translation of translations” that won ecstatic and unparalleled acclaim as “the best translation of Homer since Pope’s” (The New York Review of Books).

Logue’s account of Homer’s Iliad is a radical reimagining and reconfiguration of Homer’s tale of warfare, human folly, and the power of the gods in language and verse that is emphatically modern and “possessed of a very terrible beauty” (Slate). Illness prevented him from bringing his version of the Iliad to completion, but enough survives in notebooks and letters to assemble a compilation that includes the previously published volumes War Music, Kings, The Husbands, All Day Permanent Red, and Cold Calls, along with previously unpublished material, in one final illuminating volume arranged by his friend and fellow poet Christopher Reid. The result, War Music, comes as near as possible to representing the poet’s complete vision and confirms what his admirers have long known: that “Logue’s Homer is likely to endure as one of the great long poems of the twentieth century” (The Times Literary Supplement).

Christopher Logue is a screenwriter, a film actor, and the author of several books of poems. He lives in London, England.

Christopher Reid is Senior Lecturer in English at Queen Mary, University of London. A former poetry editor at Faber and Faber, he worked with Ted Hughes on Tales of Ovid and Birthday Letters among other books. A Costa Award-winning poet, Christopher is the author of A Scattering and Anniversary and The Song of Lunch.

Praise For War Music: An Account of Homer's Iliad…

"This is not Homer: it’s Logue’s Homer. Like all translations, it departs fundamentally from the language of the original. Unlike many translations, it arrives at a version that, because of its radical departures, gets us closer to the original than many more defensibly 'faithful' translations have ever managed . . . " —Wyatt Mason, New York Times Magazine

"I still grasp Zeus by the knees and ask that he bless the translators. And Christopher Logue, among them, bless him highly . . . [Homer's Iliad] was strange from the beginning, wonderfully, heroically strange. And Logue, in turn, is wonderfully, Homerically strange . . ." —Jeffrey Brown, New York Times Book Review