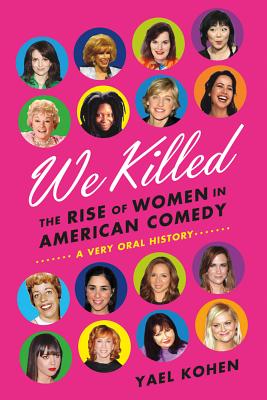 The Rise of Women in American Comedy

No matter how many times female comedians buck the conventional wisdom, people continue to ask: "Are women funny?" The question has been nagging at women off and on (mostly on) for the past sixty years. It's incendiary, much discussed, and, as proven in Yael Kohen's fascinating oral history, totally wrongheaded.

In "We Killed," Kohen pieces together the revolution that happened to (and by) women in American comedy, gathering the country's most prominent comediennes and the writers, producers, nightclub owners, and colleagues who revolved around them. She starts in the 1950s, when comic success meant ridiculing and desexualizing yourself; when Joan Rivers and Phyllis Diller emerged as America's favorite frustrated ladies; when the joke was always on them. Kohen brings us into the sixties and seventies, when the appearance of smart, edgy comedians (Elaine May, Lily Tomlin) and the women's movement brought a new wave of radicals: the women of "SNL," tough-ass stand-ups, and a more independent breed on TV (Mary Tyler Moore and her sisters). There were battles to fight and preconceptions to shake before we could arrive in a world in which women like Chelsea Handler, Sarah Silverman, and Tina Fey can be smart, attractive, sexually confident and, most of all, flat-out funny.

As the more than 150 people interviewed for this riveting oral history make clear, women have always been funny. It's just that every success has been called an exception and every failure an example of the rule. And as each generation of women has developed its own style of comedy, the coups of the previous era are washed away and a new set of challenges arises. But the result is the same: They kill. A chorus of creative voices and hilarious storytelling, "We Killed "is essential cultural and social history, and as it should be great entertainment.

Yael Kohen is a reporter and editor in New York City. A contributing editor at "Marie Claire," she covers books, pop culture, and issues important to working women. She has written for "New York "magazine, "Salon," "The Daily Beast," the New York "Daily News," and "The New York Sun."