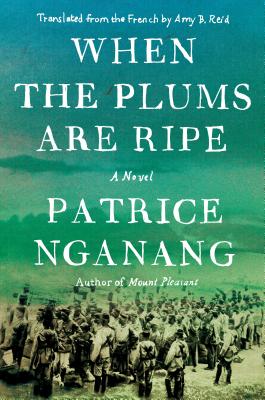 When the Plums Are Ripe (Hardcover)

By Patrice Nganang, Amy B. Reid (Translated by)

The second volume in a magisterial trilogy, the story of Cameroon caught between empires during World War II

In Cameroon, plum season is a highly anticipated time of year. But for the narrator of When the Plums Are Ripe, the poet Pouka, the season reminds him of the “time when our country had discovered the root not so much of its own violence as that of the world’s own, and, in response, had thrown its sons who at that time were called Senegalese infantrymen into the desert, just as in the evenings the sellers throw all their still-unsold plums into the embers.” In this novel of radiant lyricism, Patrice Nganang recounts the story of Cameroon’s forced entry into World War II, and in the process complicates our own understanding of that globe-spanning conflict. After the fall of France in 1940, Cameroon found itself caught between Vichy and the Free French at a time when growing nationalism advised allegiance to neither regime, and was ultimately dragged into fighting throughout North Africa on behalf of the Allies.

Moving from Pouka’s story to the campaigns of the French general Leclerc and the battles of Kufra and Murzuk, Nganang questions the colonial record and recenters African perspectives at the heart of Cameroon’s national history, all the while writing with wit and panache. When the Plums Are Ripe is a brilliantly crafted, politically charged epic that challenges not only the legacies of colonialism but the intersections of language, authority, and history itself.

Patrice Nganang was born in Cameroon and is a novelist, poet, and essayist. His novel Temps de chien (Dog Days) received the Prix Marguerite Yourcenar and the Grand prix littéraire d’Afrique noire. He is also the author of La Joie de vivre, L’Invention d’un beau regard, and Mont Plaisant (Mount Pleasant). He teaches comparative literature at Stony Brook University.

Praise For When the Plums Are Ripe: A Novel…

A Library Journal Best Book of 2019

“Nganang’s second novel (after 2016’s Mount Pleasant) in a trilogy about Cameroon takes place as the nation is forced into World War II and caught between Vichy and the Free French. The plot and action are matched by the author’s powerful take on the damage colonialism inflicts for generations.” —Bethanne Patrick, The Washington Post

“What happens to a colony when its colonizer becomes colonized itself? That’s the questioned underlying [When the Plums Are Ripe] . . . [A] richly detailed novel . . . A brilliant, beguiling story.” —Kirkus Reviews (starred review)

“Nganang is a political force whose experiences in Cameroon inform every page of this novel . . . For those who appreciate how fiction illuminates history, [When the Plums Are Ripe] will be an eye-opener.” —Library Journal

“Nganang continues his rich, complex saga of WWII-era Cameroon with this second volume in a trilogy . . . [When the Plums Are Ripe] confronts the horrible history of French colonialism: the French’s use of ‘black soldiers for cannon fodder’ in fighting the Axis powers . . . With a narrative structure reminiscent of African oral traditions, an unknown narrator heralds . . . the young men who shed their blood for a Western country and the young women left behind . . . With lyrical, soaring prose, Nganang sings their song, challenging the Euro-written history of colonialism and replacing it with a much-needed African one.” —Publishers Weekly