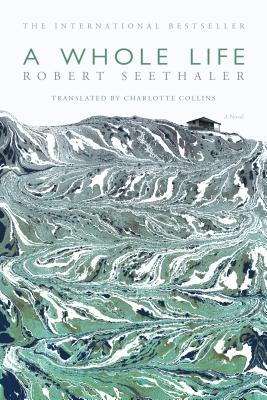 “Andreas Egger lived his whole life with nature as his most trusted companion. When humans, war, and debilitating events threatened him, he quietly climbed mountains, bathed in icy streams, watched the sun streak its intense color into the sky, and then put his head down and forged ahead. He lived eight decades, mostly alone, and faced death and privation with heroism, stoicism, and a depth of character rarely seen in the 'modern' 20th century. In this short novel, Seethaler has poetically created a character and a way of looking at the natural world that readers will never forget.”
— Gayle Shanks (W), Changing Hands Bookstore, Tempe, AZ
View the List

Andreas Egger knows every path and peak of his mountain valley, the source of his sustenance, his livelihood--his home.

Set in the mid-twentieth century and told with beauty and tenderness, Robert Seethaler's A Whole Life is a story of man's relationship with an ancient landscape, of the value of solitude, of the arrival of the modern world, and above all, of the moments, great and small, that make us who we are.


Praise For A Whole Life: A Novel…

“One of my treasured discoveries this year was Robert Seethaler’s A Whole Life . . . From the very first page you know it’s about to rearrange your mental universe. It is a breathtaking, heartbreaking story that encapsulates a universe of change, loss, resilience.” —Anuradha Roy, The Millions

“A Whole Life is a provocatively ambitious title for this spare, novella-length work . . . Flecked with profundity [and] dark humor." —John Williams, The New York Times

“A tender and moving look at the human capacity for adaptation, Seethaler’s understated tale is a
reminder that joy can be found in daily toils and simple pleasures.” —Jonathan Fullmer, Booklist

"Readers will discover in [Seethaler's] contained prose a vehicle for keen insight and observation." —Publishers Weekly

"The book's prose has a directness and detail that helps set off the moments of genuine wisdom and restrained poetry . . . It is at this point that you realize why the novel should be doing so well in Germany, and why it is so urgent for the rest of us: it can guide its readers to make the best of their lives, however they turn out." —Sunday Telegraph

"Against the backdrop of a literary world that often seems crowded with novels yelling 'Look at me!,' it's refreshing to read a story marked by quiet, concentrated attention . . . Deeply moving." —Sunday Times

"Seethaler shows that for even the most ordinary people, life is an extraordinary adventure—and he does so tenderly and memorably." —Mail on Sunday

Robert Seethaler was born in Vienna in 1966 and is the author of several novels, including the international bestselling, Man Booker Prize-nominated A Whole Life. He also works as an actor, including in Paolo Sorrentino’s Youth. He lives in Berlin.

Charlotte Collins studied English at Cambridge University. She worked as an actor and radio journalist in both Germany and the U.K. before becoming a literary translator. She previously translated Robert Seethaler’s novelThe Tobacconist.
Loading...
or
Not Currently Available for Direct Purchase