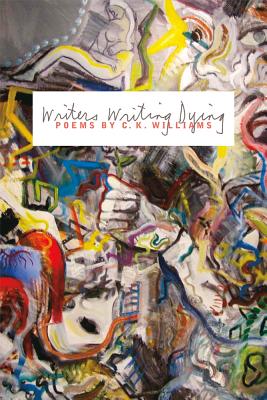 Since his first poetry collection, Lies, C. K. Williams has nurtured an incomparable reputation—as a deeply moral poet, a writer of profound emotion, and a teller of compelling stories. In Writers Writing Dying, he retains the essential parts of his poetic identity—his candor, the drama of his verses, the social conscience of his themes—while slyly reinventing himself, re-casting his voice, and in many poems examining the personal—sexual desire, the hubris of youth, the looming specter of death—more bluntly and bravely than ever. In "Prose," he confronts his nineteen year-old self, who despairs of writing poetry, with the question "How could anyone know this little?" In a poem of meditation, "The Day Continues Lovely," he radically expands the scale of his attention: "Meanwhile cosmos roars on with so many voices we can't hear ourselves think. Galaxy on. Galaxy off. Universe on, but another just behind this one . . . " Even the poet's own purpose is questioned; in "Draft 23" he asks, "Between scribble and slash—are we trying to change the world by changing the words?" With this wildly vibrant collection—by turns funny, moving, and surprising—Williams proves once again that, he has, in Michael Hofmann's words, "as much scope and truthfulness as any American poet since Lowell and Berryman."

“With . . . precision and passion . . . [Williams] show[s] that … [he] also know[s] how to make love to the page, urging the reader to go slow--which is how all poetry should be read . . . Mr. Williams is an old pro of the conversational barroom line, the rangy line . . . raw boned and sinewy . . . It still serves him well, as in the long poem "Newark Noir," in which he tries to distill his hometown to its essence . . Writers Writing Dying is a solid addition to Mr. Williams's house of verse, and in it he pays his respects to literary ancestors . . . more than 40 years since his first book, Mr. Williams isn't quite ready to quit.” —Dana Jennings, The New York Times

“Williams, one of America's most celebrated poets, now in his 70s, has been thinking out loud about death--his own--concertedly over his past several books, but this is the first time he's really having fun, taking a jaunty stroll toward oblivion, departing a life wasted ‘Sucking up another dumb movie on HBO' to reckon with his masters, the poets whose enduring lines have left him, as he says memorably in the book's opening poem ‘whacked so hard that you bash the already broken crown of your head.' In a poem about poetry's capacity to ease depression, he asks, ‘Who should I be reading? Let's see. Neruda? No way, too rich. / Lowell and Larkin, good god, we're already in the pits . . ." In talky lines like these, thick with self-mocking irony, Williams is able to embody, if not confront, his growing fear, offering a strong dose of sideways empathy at the same time. Williams charges ahead, racing to get out of his own control--‘Think, write, write, think: just keep galloping faster and you won't even notice you're dead,' he says in the book's title poem--making for his most thrilling book in years.” —Publishers Weekly (starred review)

“Using a Walt Whitman- and Allen Ginsberg-inspired long, free-verse line, Williams demonstrated a fresh way of rendering the passion of intellect, the contortions of the psyche and the chaos of emotion . . . At 76, C. K. Williams remains one of our most necessary, vital poets. His work continues to surprise, exalt and instruct in equal, passionate measure. Long may his lines unfurl.” —John Repp, The Plain Dealer (Cleveland)

“[Williams is] a political poet, an emotional one too . . . But Williams won't be going gently into a good night anytime soon; he'll be railing and fighting . . . A new collection, part angry, part sad, part somber, from one of America's most thoughtful and caring poets.” —Tom Lavoie, Shelf Awareness

“Williams' admiration of Walt Whitman shows in long-legged lines that spill across the page, twisting and pulsing with his thinking. Poems have rueful, sometimes goofy titles like "Vile Jelly" or "Watching the Telly with Nietzsche." Although they're about things as various as cancer or impotence or the death of his grandfather years ago, they're also about reading and writing and wanting to read and wanting to write. They're about desiring the kind of experience that lifts us out of boredom or depression or absurdity and into something transcendent. It's this kind of experience Williams claims he's hooked on, or as he puts it, whacked by. But Williams doesn't just love poetry for the high. Poets and philosophers and artists follow Williams around in his poems, sneaking up on him, arguing with him, teaching him things. Basho and Yeats and Auden and Larkin and Warhol and Camus all emerge amid grandfathers and diseases and memories to give life some shape, some way of being known at all. Anyone hooked on reading will feel a kinship with this kinetic book.” —Tess Taylor, All Things Considered

“[Williams's] recent manner tends to be more daring, headlong, and aggressive, as if he'd received a charge of adolescent energy to go with a turn toward all-out, no-holds-barred performance.” —Stuart Mitchner, Town Topics

“This immaculate poet / scholar uses bits of the past as stones in his quarry, to fill the poem with ideas, rumination, insight, reaction. Williams's writing is pure seduction, effortless--the way his thinking becomes phrase . . . In Williams's case there is a living tissue linking language to thought--one idea vanishes to another, sparking energy and then a fact is recalled, then a quote, an intervention of just the right sound--the exact diction--there will be moments of introspection, a spiral of connections, then back to the writer who admits he owns it. This is a C. K. Williams composition. It seems as if Williams writes without a strategy, problem or argument. It's more that he begins with some sort of agreement with himself, a conviction not to build or manufacture, and it comes to us seamless. Williams is self seeking in poems but never oversteps; he is a precise poet in intention and articulation . . . No book is more worthy of our attention this year. Williams's skein of mortality, aging, time, his long line of shadow and light--we have no choice but to follow.” —Grace Cavalieri

“Matching length of line to length of life, Williams writes with humor and poignancy about aging . . . C. K. Williams's many readers will be happy to receive these lively and interesting new poems, whatever the process that births them.” —Benjamin Myers, World Literature Today

C. K. Williams (1936–2015) published twenty-two books of poetry including, Flesh and Blood, which won the National Book Critics Circle Award; Repair, which won the Pulitzer Prize in Poetry; and The Singing, winner of the National Book Award. Williams was awarded the Ruth Lilly Poetry Prize in 2005. He wrote a critical study, On Whitman; a memoir, Misgivings; and two books of essays, Poetry and Consciousness and In Time: Poets, Poems,and the Rest.
Loading...
or
Not Currently Available for Direct Purchase