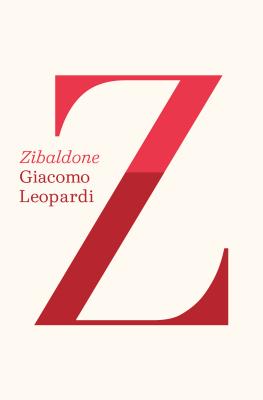 Giacomo Leopardi was the greatest Italian poet of the nineteenth century and was recognized by readers from Nietzsche to Beckett as one of the towering literary figures in Italian history. To many, he is the finest Italian poet after Dante. (Jonathan Galassi's translation of Leopardi's Canti was published by FSG in 2010.)
He was also a prodigious scholar of classical literature and philosophy, and a voracious reader in numerous ancient and modern languages. For most of his writing career, he kept an immense notebook, known as the Zibaldone, or "hodge-podge," as Harold Bloom has called it, in which Leopardi put down his original, wide-ranging, radically modern responses to his reading. His comments about religion, philosophy, language, history, anthropology, astronomy, literature, poetry, and love are unprecedented in their brilliance and suggestiveness, and the Zibaldone, which was only published at the turn of the twentieth century, has been recognized as one of the foundational books of modern culture. Its 4,500-plus pages have never been fully translated into English until now, when a team under the auspices of Michael Caesar and Franco D'Intino of the Leopardi Centre in Birmingham, England, have spent years producing a lively, accurate version. This essential book will change our understanding of nineteenth-century culture. This is an extraordinary, epochal publication.

Giacomo Leopardi was born in Recanati, a small town in the Italian Marches, in 1798. Renowned in his youth as a classical scholar, he suffered from poor health all his life and never experienced happiness in love. He visited Rome, Bologna, and Florence, but never fully broke away from his family, until in his last years he finally moved with a friend to Naples, where he died in 1837. He is the author of Zibaldone.

Michael Caesar is the co-editor of Zibaldone.

Franco D'Intino is the co-editor of Zibaldone.

Ann Goldstein is an editor at the New Yorker. She has translated works by Roberto Calasso, Alessandro Baricco, Pier Paolo Pasolini, and Aldo Buzzi. The recipient of the PEN Renato Poggioli Translation Award, she is the editor of the forthcoming collected works of Primo Levi. She lives in New York.

“The greatest intellectual diary of Italian literature, its breadth and depth of thought often compared to the work of Schopenhauer and Nietzsche. The Zibaldone's long-overdue translation into English in this handsome edition is warmly to be welcomed . . . With its excellent introduction, its generous notes and cross-referencing, this edition is a huge achievement, making available at last a key document in the history of European thought and throwing light on Leopardi's unique poetry and prose works.” —Tim Parks, The New York Review of Books

“Beautifully rendered into English by seven translators, superbly edited and annotated by Michael Caesar and Franco D'Intino under the auspices of the Leopardi Centre at the University of Birmingham, with its more than 2,500 pages elegantly printed on thin, Bible-like paper, this is not just a triumph of scholarship but a work of art of which its author could have been justly proud. The first full English version of the Zibaldone is a major event in the history of ideas. With its publication, Leopardi will be ranked among the supreme interrogators of the modern condition.” —John Gray, The New Statesman

“There are several titans of world literature whose complete works still languish in their native language . . . To the ranks of heroes who tackle such enormities we must now add the seven translators who have given us Leopardi's Zibaldone at long last, after seven years' labor, a confluence of biblically significant numbers we would scarcely believe in fiction . . . There is something miraculous, too, about the text itself, as Franco D'Intino, one of the editors of this edition, makes us realize. The manuscript lay buried for years in a trunk, unknown to the world. Not until sixty years after Leopardi's death was the Zibaldone first published. Here, suddenly, was Leopardi the thinker and philosopher, whereas Italy before had known only the doomed Romantic poet. So it has been for us. Only now are we seeing Leopardi whole. His poetry had made him the peer in world literature of Whitman and Wordsworth, but the 4,526-page Zibaldone places him in a different realm entirely . . . There are moments of great beauty, aphorisms of penetrating insight . . . Leopardi's diary is undeniably the record of a great mind divesting itself of illusions . . . His writing, which repudiates existence, enriches our own; his diary in English represents an almost embarrassing increase in our accounts. The book of twenty million pages is life, and is also the Zibaldone, inexhaustible and worthy of endless meditation.” —Brian Patrick Eha, The American Reader

“In the history of Italian literature, arguably only Dante occupies a more exalted position than Giacomo Leopardi . . . Both Leopardi’s verse . . . and his works of prose . . . enjoy an unassailable reputation for lyrical beauty, philosophical depth, immense erudition, and indefatigable originality. The Italian language has known no more brilliant master of both its native extravagances and its native subtleties . . . In short, he was a literary giant, and was for the most part recognized as such in his own time. His most gigantic achievement, however, may have been the work we have come to know as the Zibaldone—the ‘gallimaufry,’ ‘hodge-podge,’ or ‘miscellany’—his heterogeneous, sprawling, positively oceanic journal intime . . . Had this work never become known to the public, Leopardi would still be revered as a genius, but the sheer magnitude of his genius would scarcely be suspected. He poured everything into its pages: philosophy, philology and general linguistics, historical studies, cultural observations, critiques of the arts, political ruminations, personal confessions, and much more. It is a vast compendium of impromptu treatises, ringing aphorisms, hoarded curiosities, subtle observations, oracular pronouncements, and flights of invention. It is wholly absorbing and unflaggingly brilliant . . . It is a magnificent achievement, rich and varied and well worth both its large price and the strain it will put upon one’s bookshelves and wrists. The seven translators and two editors who produced this English edition have accomplished something heroic and precious, and they deserve the gratitude of the Anglophone literary world . . . Zibaldone is written in a voice that, again and again, bears the inflections of someone whose life consisted to a great degree in the tension between, on the one hand, physical and cultural constraints and, on the other, boundless imaginative and theoretical creativity. It is an almost titanically exuberant treasury of astonishing insights and mental adventures; it is also in many ways one of the bleakest books ever written. Leopardi’s vision of reality was, before all else, unremittingly atheistic—which is to say, it was a vision purged not only of faith, but of every one of those lingering vestiges of faith with which shallower, less reflective atheists console and seduce themselves, and shield their minds against the logical conclusions their unbelief entails . . . His repudiation of every soothing idealism—moral, social, historical, what have you—was uncompromising and, in a quietly constant way, ferocious . . . Leopardi’s literary genius, philosophical agility, colossal erudition, and immense fertility of imagination make his eyes somehow as much entertaining as provoking . . . Frankly, the bleakness of Leopardi’s vision is so free of any pathetic self-deception that at times it seems positively sublime. In the end, he concluded, we possess no real knowledge of anything, because we ourselves are nothing, arising from and returning to nothingness, with nothing to hope for . . . The Zibaldone is a great surging ocean of brilliant insights . . . The book is, unquestionably, a work of magnificent genius.” —David Bentley Hart, First Things

“It is only now, almost two hundred years after Leopardi wrote, that the Zibaldone has been translated in its entirety into English. To get a sense of the sheer scope of Leopardi's intellect, the range of subjects that engaged him and the bodies of knowledge he mastered, consider how many scholars it took to translate and annotate this enormous book. In addition to the Zibaldone's two editors, Michael Caesar and Franco D'Intino, there are seven credited translators, an editorial board of seven people, and a list of ‘specialist consultants' in subjects ranging from Chinese, Hebrew, and Sanskrit to musicology, law, and the history of science . . . This complete Zibaldone gives us . . . an unfolding sense of the excitement and variety of Leopardi's inner life--the feeling that we are making his discoveries along with him . . . At some of the most powerful and revealing moments in the Zibaldone, we are able to see how Leopardi's theory of despair was born from the experience of despair . . . Perhaps this book is most significant as a vast objective correlative--bringing us as close as we can come, or want to come, to the brilliant bleakness of his inner life.” —Adam Kirsh, The New Republic

“The Zibaldone can firmly establish [Giacomo Leopardi's] role as one of the 19th-century's greatest thinkers . . . Thanks to this translation, we now have a window on his workshop and can delight in his readable and thought-provoking reflections on politics, philosophy, literature, philology--even a bit of phrenology--and a wealth of tastefully selected quotes. Finally available in English thanks to a monumental effort by Michael Caesar and Franco D'Intino--who shepherded a team of seven principal translators--the Zibaldone marks the end of nearly a decade of work at the University of Birmingham's Leopardi Centre. There is something heroic about such a project . . . Congratulations are due to everyone involved in this landmark publication. Leopardi's Zibaldone is quite simply a work of genius.” —André Naffis-Sahely, The Independent

“The Zibaldone is surprisingly fun to dip into, a nightstand book rather than a doorstopper, and something to think about as you head to the beach this weekend--if you can fit it into your bag.” —Daniel Berchenko, Publishers Weekly

“The central thesis of Zibaldone is that life is miserable and there is nothing to be done about it . . . The seduction of Zibaldone is in reading the words of a man who hasn't flinched from the hardest thoughts. Reading Zibaldone is like getting permission to go into a room that is usually locked. It is a chance to let the dark thoughts speak. It is a chance to look at the desolation without brushing it away. It is a chance to sit and soak in the melancholy. Right now, at this moment in history, soaking in the melancholy seems the right thing to do. We are surrounded, after all, by a civilization that seeks pleasure and distraction with a shrillness that makes Imperial Rome look reserved. The current mainstream discussion of human happiness and infinite progress is so coarse that it has been more or less abandoned to the technocrats. Reflective persons have nowhere to turn. And then a volume like Zibaldone turns up. Leopardi, in his infinite gloom, takes on the guise of a savior. This is what it must have been like to stumble across a volume of Pascal's Pensées in the late 17th century. It is like plunging into a very cold, very fresh mountain stream after days of walking in the hot sun.” —Morgan Meis, The Smart Set

“This is the first complete English edition of the Zibaldone . . . Editors Michael Caesar and Franco D'Intino are to be commended for bringing this daunting task to fruition . . . The scale of the undertaking becomes readily apparent when you peruse the book.” —Leslie Jones, The Quarterly Review