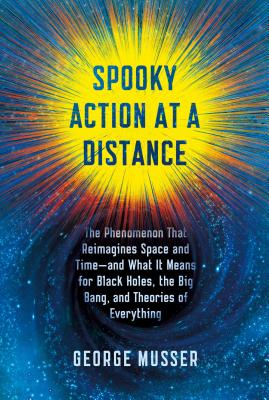 Spooky Action at a Distance

The Phenomenon That Reimagines Space and Time--and What It Means for Black Holes, the Big Bang, and Theories of Everything

Delightfully readable, Spooky Action at a Distance is a mind-bending voyage to the frontiers of modern physics that will change the way we think about reality.

What is space? It isn't a question that most of us normally ask. Space is the venue of physics; it's where things exist, where they move and take shape. Yet over the past few decades, physicists have discovered a phenomenon that operates outside the confines of space and time: nonlocality--the ability of two particles to act in harmony no matter how far apart they may be. It appears to be almost magical.

Einstein grappled with this oddity and couldn't come to terms with it, describing it as "spooky action at a distance." More recently, the mystery has deepened as other forms of nonlocality have been uncovered. This strange occurrence, which has direct connections to black holes, particle collisions, and even the workings of gravity, holds the potential to undermine our most basic understandings of physical reality. If space isn't what we thought it was, then what is it?

In Spooky Action at a Distance, George Musser sets out to answer that question, offering a provocative exploration of nonlocality and a celebration of the scientists who are trying to explain it. Musser guides us on an epic journey into the lives of experimental physicists observing particles acting in tandem, astronomers finding galaxies that look statistically identical, and cosmologists hoping to unravel the paradoxes surrounding the big bang. He traces the often contentious debates over nonlocality through major discoveries and disruptions of the twentieth century and shows how scientists faced with the same undisputed experimental evidence develop wildly different explanations for that evidence. Their conclusions challenge our understanding of not only space and time but also the origins of the universe-and they suggest a new grand unified theory of physics.

“An important book that provides insight into key new developments in our understanding of the nature of space, time and the universe. It will repay careful study.” —John Gribbin, The Wall Street Journal

“An endlessly surprising foray into the current mother of physics' many knotty mysteries, the solving of which may unveil the weirdness of quantum particles, black holes, and the essential unity of nature.” —Kirkus Reviews (starred review)


Praise For Spooky Action at a Distance: The Phenomenon That Reimagines Space and Time--and What It Means for Black Holes, the Big Bang, and Theories of Everything…

Short-listed for Physics World's 2016 Book of the Year

The Science Books We Loved Most in 2015, Gizmodo

“An important book that provides insight into key new developments in our understanding of the nature of space, time and the universe. It will repay careful study.” —John Gribbin, The Wall Street Journal

“Musser deftly traces the history of our quest to understand this curious phenomenon, covering an ambitious breadth of challenging topics from string theory to the multiverse to the unification of physics.” —Science

“[An] enlightening (and highly entertaining) book, one that takes us beyond earlier popular treatments into the speculative thickets of contemporary physics.” —Jim Holt, The New York Review of Books

“A good science writer has to show us the fallible men and women who made the theory, and then show us why, after the human foibles are boiled off, the theory remains reliable. No well-tested scientific concept is more astonishing than the one that gives its name to a new book by the Scientific American contributing editor George Musser, Spooky Action at Distance. The ostensible subject is the mechanics of quantum entanglement; the actual subject is the entanglement of its observers. Musser presents the hard-to-grasp physics of 'non-locality,' and his question isn't so much how this weird thing can be true as why, given that this weird thing has been known about for so long, so many scientists were so reluctant to confront it.” —Adam Gopnik, The New Yorker

“A highly enjoyable tour-de-force . . . Amid the superb writing here is a lot of information that will bring you up to date on everything you should know about this compelling mystery . . . this book will be one of the reading highlights of your year.” —David Eicher, Astronomy magazine

“Ambitious . . . the author has done a monumental job of translating recondite theory into laymen's terms.” —Laurence A. Marschall, Natural History

“In this polished study of the concept that Albert Einstein dubbed 'spooky action at a distance', science writer George Musser tours the entangled research, history and philosophical speculation surrounding it . . .
proving that this is one of the most engrossing disputes in science.” —Nature

“Musser explores the history of humans grappling with nonlocality and what these strange effects are teaching quantum mechanics researchers, astronomers, cosmologists and more about how the universe works—and while doing so, showing the messy, nonlinear and fascinating way researchers push forward to understand the physical world.” —Sarah Lewin, Space.com

“The journalistic style of this book is smooth and pleasing, rich with personal interviews that touch on the inner workings of researchers, and vignettes from contributors’ lives to add colour. Musser is a witty writer . . . As an experimental physicist, I certainly learned a lot, and am armed with new visual metaphors and fresh insight into an often perplexing field.” —James Millen, Physics World

“I join many others in regarding Musser as one of the best science writers covering cutting-edge physics research . . . His book contains fascinating, mind-expanding ideas, and I’ve been thinking about them for days on end.” —Ben P. Stein, Inside Science

“An endlessly surprising foray into the current mother of physics' many knotty mysteries, the solving of which may unveil the weirdness of quantum particles, black holes, and the essential unity of nature.” —Kirkus Reviews (starred review)

“Accessible and imaginative . . . Clarity and humor illuminate Musser’s writing, and he adroitly captures the excitement and frustration involved in investigating the mysteries of our universe.” —Publishers Weekly

“Can two subatomic particles on opposite sides of the universe truly be instantaneously connected? Or is any theory that predicts such a connection necessarily flawed or incomplete? Are the results of experiments that demonstrate such a connection being misinterpreted? Such questions challenge our most basic concepts of spatial distance and time. In Spooky Action At A Distance, George Musser beautifully navigates through the history, science, and philosophy of these mind-boggling conundrums, and expounds cutting edge thinking.” —Mario Livio, astrophysicist and bestselling author of Brilliant Blunders and The Golden Ratio

“George Musser gives us a fascinating tour of the latest attempts on the frontiers of physics to answer one of the oldest questions in science: What is space? And the wonderful lesson is that the deeper we look into the question, the more captivating it becomes.” —Lee Smolin, founding faculty member at the Perimeter Institute for Theoretical Physics and author of The Trouble with Physics

“With clever metaphors and dry humor, acclaimed science communicator George Musser is the perfect tour guide on this wild ride through wormholes and emergent dimensions to the cutting edge of physics. This quest to understand the ultimate nature of space may forever transform how you think about the very fabric of reality.” —Max Tegmark, physicist and author of Our Mathematical Universe

“Modern physics is in the process of dismantling the very space all around us, and the universe will never be the same. In this engaging book, George Musser leads us through the thickets of science and philosophy and takes us to the brink of a very different view of the world.” —Sean Carroll, theoretical physicist at the California Institute of Technology and author of The Particle at the End of the Universe

“Locality has been a fruitful and reliable principle, guiding us to the triumphs of twentieth-century physics. Yet the consequences of local laws in quantum theory can seem 'spooky' and nonlocal-and some theorists are questioning locality itself. Spooky Action at a Distance is a lively introduction to these fascinating paradoxes and speculations.” —Frank Wilczek, winner of the Nobel Prize in Physics and author of The Lightness of Being and A Beautiful Question

George Musser is an award-winning journalist, a contributing editor for Scientific American, and the author of The Complete Idiot's Guide to String Theory. He is the recipient of a Jonathan Eberhart Planetary Sciences Journalism Award from the American Astronomical Society and the 2011 American Institute of Physics Science Communication Award for Science Writing. He was a Knight Science Journalism fellow at MIT from 2014 to 2015. He has appeared on Today, CNN, NPR, the BBC, Al Jazeera, and other outlets. He lives in Glen Ridge, New Jersey, with his wife and daughter.
Loading...
or
Not Currently Available for Direct Purchase