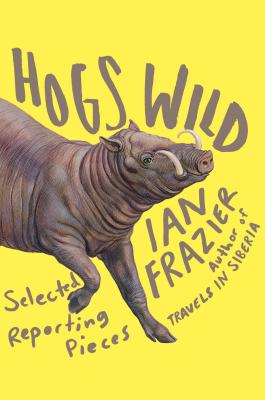 "A master of both distilled insight and utter nonsense" (The Believer), Ian Frazier is one of the most gifted chroniclers of contemporary America. Hogs Wild assembles a decade's worth of his finest essays and reportage, and demonstrates the irrepressible passions and artful digressions that distinguish his enduring body of work.

Part muckraker, part adventurer, and part raconteur, Frazier beholds, captures, and occasionally reimagines the spirit of the American experience. He travels down South to examine feral hogs, and learns that their presence in any county is a strong indicator that it votes Republican. He introduces us to a man who, when his house is hit by a supposed meteorite, hopes to "leverage" the space object into opportunity for his family, and a New York City police detective who is fascinated with rap-music-related crimes. Alongside Frazier's delight in the absurdities of contemporary life is his sense of social responsibility: there's an echo of the great reform-minded writers in his pieces on a soup kitchen, opioid overdose deaths on Staten Island, and the rise in homelessness in New York City under Mayor Bloomberg.

In each dizzying discovery, Hogs Wild unearths the joys of inquiry without agenda, curiosity without calculation. To read Frazier is to become a kind of social and political anthropologist--astute and deeply engaged.

"[Ian Frazier] is like an archeologist of social sensibilities, paying rapt attention to dialect, landscapes, sounds, and political quirks, then displaying them in artfully simple sentences."—The New Yorker

"A writer of uncommon grace and subtlety."—Steve Johnson, Chicago Tribune

Ian Frazier is the author of Travels in Siberia, Great Plains, On the Rez, Lamentations of the Father and Coyote V. Acme, among other works, all published by Farrar, Straus and Giroux. He graduated from Harvard University. A frequent contributor to The New Yorker, he lives in Montclair, New Jersey.
Loading...
or
Not Currently Available for Direct Purchase