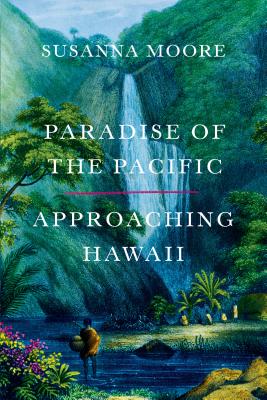 The history of Hawaii may be said to be the story of arrivals—from the eruption of volcanoes on the ocean floor 18,000 feet below, the first hardy seeds that over millennia found their way to the islands, and the confused birds blown from their migratory routes, to the early Polynesian adventurers who sailed across the Pacific in double canoes, the Spanish galleons en route to the Philippines, and the British navigators in search of a Northwest Passage, soon followed by pious Protestant missionaries, shipwrecked sailors, and rowdy Irish poachers escaped from Botany Bay—all wanderers washed ashore, sometimes by accident. This is true of many cultures, but in Hawaii, no one seems to have left. And in Hawaii, a set of myths accompanied each of these migrants—legends that shape our understanding of this mysterious place.
In Paradise of the Pacific, Susanna Moore, the award-winning author of In the Cut and The Life of Objects, pieces together the elusive, dramatic story of late-eighteenth-century Hawaii—its kings and queens, gods and goddesses, missionaries, migrants, and explorers—a not-so-distant time of abrupt transition, in which an isolated pagan world of human sacrifice and strict taboo, without a currency or a written language, was confronted with the equally ritualized world of capitalism, Western education, and Christian values.


Praise For Paradise of the Pacific: Approaching Hawaii…

“Paradise of the Pacific, Ms. Moore’s new nonfiction book about Hawaii . . . provides a fascinating history of that Pacific archipelago . . . It is an elegantly written and conscientiously researched book.” —Michiko Kakutani, The New York Times

“[A] fascinating account . . . The power of Paradise of the Pacific, then—as well as its bitter beauty—resides in Moore's ability to lay out this progression as a set of turning points, inevitable from the standpoint of the present, but in their own time more a matter of human ambition and fallibility.” —David Ulin, The Los Angeles Times

“ Paradise of the Pacific, a superb telling of the Hawaiian story from the earliest voyages, is immensely satisfying on so many levels-as a detailed history, as a startling drama, as a cultural heritage of bellicosity and beauty. Susanna Moore, a brilliant novelist, a scrupulous researcher, gives this complex history an astonishing vitality.” —Paul Theroux

“Just when I think I know all there is to know about Hawaiian history, Susanna Moore (once again) proves me wrong. With a voice of friendly authority and wit, she translates meticulous research into gripping prose.” —Kaui Hemmings, author of The Descendants

“This is a fascinating and well-balanced look at how a unique culture came to be and the heartbreaking manner of its end.” —Publishers Weekly

“Moore digs deep and delivers a thoroughly researched account of Hawaii's distinct culture and history . . . Moore's background in storytelling radiates throughout this work, creating a quick-paced and well-crafted narrative. Highly recommended for the armchair historian and those intrigued by Hawaiian history, maritime exploration, and the history of Christian missionaries.” —Library Journal

“Paradise of the Pacific is a work of scholarship, sympathy, and, as with all Susanna Moore's books, literary elegance. It is also a long amazement. One figure after another steps from the shadows in a world that sometimes seems as remote as Homer's.” —Alec Wilkinson, author of The Ice Balloon—Library Journal

Susanna Moore is the author of the novels The Life of Objects, The Big Girls, One Last Look, In the Cut, Sleeping Beauties, The Whiteness of Bones, and My Old Sweetheart, and the nonfiction works I Myself Have Seen It: The Myth of Hawai‘i and Paradise of the Pacific: Approaching Hawaii. She lives in Hawai‘i and teaches at Princeton University.
Loading...
or
Not Currently Available for Direct Purchase