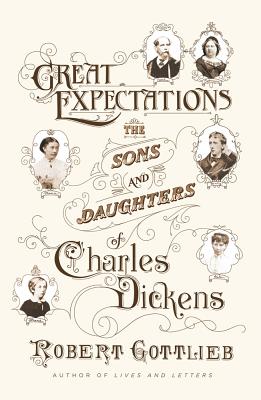 The Sons and Daughters of Charles Dickens

Charles Dickens, famous for the indelible child characters he created—from Little Nell to Oliver Twist and David Copperfield—was also the father of ten children (and a possible eleventh). What happened to those children is the fascinating subject of Robert Gottlieb's Great Expectations. With sympathy and understanding he narrates the highly various and surprising stories of each of Dickens's sons and daughters, from Kate, who became a successful artist, to Frank, who died in Moline, Illinois, after serving a grim stretch in the Royal Canadian Mounted Police.

Each of these lives is fascinating on its own. Together they comprise a unique window on Victorian England as well as a moving and disturbing study of Dickens as a father and as a man.


Praise For Great Expectations: The Sons and Daughters of Charles Dickens…

“Robert Gottlieb's Great Expectations: The Sons and Daughters of Charles Dickens is an ingenious way of using the available information on Dickens's nine children who grew into adulthood. It throws light not only on the novelist himself, but also on the range of influence parents and home life can have on offspring. It is also a fascinating and haunting portrait of attitudes towards children and career possibilities in England in the mid-nineteenth century . . . It would have been easy for Gottlieb to trace the personal weaknesses and the strange fate of most of the Dickens brood to the separation of their parents and the banishment of their mother, but it is to his credit that he reads each case more subtly and without a scheme and allows each of the children a sort of autonomy, giving them a life not merely determined by a single traumatic event in their youth or childhood . . . The fate of the Dickens children as outlined here allows us to imagine with greater richness the lives of so many others whose names merely survive on gravestones, or census forms, or on lists of members of the army and navy. They also help us to read the novels of the period.” —Colm Tóibín, The New York Review of Books

Robert Gottlieb has been the editor in chief of Alfred A. Knopf and The New Yorker. He is the author of Sarah: The Life of Sarah Bernhard, George Balanchine: The Ballet Maker, and Lives and Letters (FSG, 2011), and is the dance critic for The New York Observer.
Loading...
or
Not Currently Available for Direct Purchase