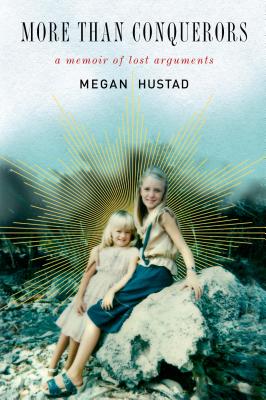 A Memoir of Lost Arguments

Megan Hustad and her family try to reconcile an evangelical upbringing in a post-Christian America
When Megan Hustad was a child, her father uprooted their family from Minneapolis to embark on a cross-cultural journey in the name of evangelical Christianity. As missionaries they brought the Gospel to the Caribbean island of Bonaire and later to the outskirts of Amsterdam. After a decade away, they returned to the States only to find themselves more alien than before. The evangelical landscape had transformed from the idealistic, market-averse movement it was in the 1970s to one where media-savvy pastors held sway over mega-churches. As the family struggled with the economic and spiritual aftermath of their break from middle-class Middle America, Megan and her sister, Amy, began to plot their escape.
Megan sets her sights on New York City, where everything she was denied as a child would be at her fingertips, and Amy makes her home among the intellectual swagger of New Englanders. But fitting in proves harder than they'd imagined. As much as Megan tries to shake them, thoughts of the God she was ignoring follow her into every party and relationship.
In "More Than Conquerors," Hustad explores what happens when the habits of your religion coincide with the demands of your social class, and what breaks when they conflict. With a sharp tongue and deep insight, Hustad offers a vivid account of the cultural divisions, anxieties, and resentments that continue to divide our country and her own family.

Megan Hustad has written articles, essays, and commentary for The New York Times, New York Post, Salon, Slate, The Big Money, The Daily Beast, The Awl, and American Public Media's Marketplace, and is the author of How to Be Useful. She has lived in Minneapolis, London, the Caribbean, and Amsterdam, and currently lives and works in New York City.

Praise For More Than Conquerors: A Memoir of Lost Arguments…

"Where does the family end and the self begin? When does a religious upbringing end and a life of considered belief begin? Few of us get to the bottom of those questions in our own lives, but Megan Hustad has sought to answer them with clarity and bravery." —Paul Elie, author of The Life You Save May Be Your Own

"Sensitive, intelligent, and deeply empathetic, More Than Conquerors is the story of a family that is both unusual and utterly relatable. As Megan Hustad tells us early on, this is not a book about abuse or neglect but about four very different and yet well-intentioned people who struggle to do the best they can by one another without renouncing their own beliefs or their own dreams. Hustad narrates her parents’ lives with such maturity and compassion that she gives the lie to the idea of the memoir as a self-obsessed genre." —Adelle Waldman, author of The Love Affairs of Nathaniel P. "Megan Hustad examines the world of international Christian evangelism as only an insider can. With fierce wit and relentless scrutiny, she reveals all the good intentions and bitter disappointments of a problematic movement—all the hope, naïveté, and ingenuity required of her family as they spread the good news abroad. What endures is the tremendous love the Hustads share for one aother. Somewhere between skepticism and faith is one American family’s commitment to one another." —Domenica Ruta, author of With or Without You"An eloquent exploration of one family’s realization that they’re unreconciled to the world as is, but that trying to change the world might break them. More Than Conquerors is a fully rounded portrayal of belief and doubt in contemporary America." —Julia Scheeres, author of Jesus Land"You’ll find no better correspondent for an account of the culture wars here and abroad than the deeply embedded Megan Hustad. Equal parts travelogue, family memoir, coming-of-age story, and philosophical reflection, More Than Conquerors tells her story well. It is the story of a little girl who grows up on the frontlines of the missionary movement to become a cosmopolitan New York book editor—one who can’t quite stop pleading her case with God and with that self-same little girl who lives on in her head." —Dalton Conley, author of Parentology"Radically compassionate, extraordinarily eloquent, deeply insightful, and utterly necessary in shining a light on a relatively unexplored corner of the American religious psyche, More Than Conquerors goes beyond memoir to be a work of ethnographic history written with a novelist’s eye for details and a poet’s ear for gorgeous turns of phrase. Megan Hustad writes with such easy command that it feels as if she has been explaining America to itself and the world for years, but the bracing vitality in her voice sounds like nothing we’ve ever heard before." —Matthew Thomas, author of We Are Not Ourselves "In More Than Conquerors, Megan Hustad distills from her unique and various upbringing a deceptively vital story of family and faith in transit. Searching, elegant, and rendered with striking, witty melancholy, her memoir of the displacements of missionary life is a balm to the essential problems of home, forgiveness, longing, and belonging." —Michelle Orange, author of This Is Running For Your Life
or
Not Currently Available for Direct Purchase
Copyright © 2020 American Booksellers Association