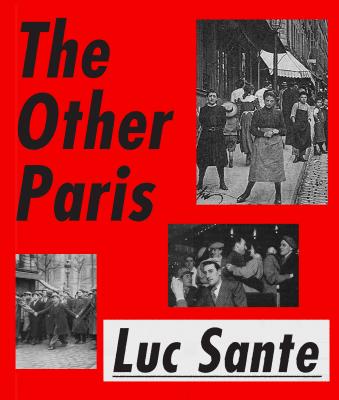 Paris, the City of Light, the city of fine dining and seductive couture and intellectual hauteur, was until fairly recently always accompanied by its shadow: the city of the poor, the outcast, the criminal, the eccentric, the willfully nonconforming. In The Other Paris, Luc Sante gives us a panoramic view of that second metropolis, which has nearly vanished but whose traces are in the bricks and stones of the contemporary city, in the culture of France itself, and, by extension, throughout the world.Drawing on testimony from a great range of witnesses-from Balzac and Hugo to assorted boulevardiers, rabble-rousers, and tramps-Sante, whose thorough research is matched only by the vividness of his narration, takes the reader on a whirlwind tour. Richly illustrated with more than three hundred images, The Other Paris scuttles through the knotted streets of pre-Haussmann Paris, through the improvised accommodations of the original bohemians, through the whorehouses and dance halls and hobo shelters of the old city.

A lively survey of labor conditions, prostitution, drinking, crime, and popular entertainment, and of the reporters, réaliste singers, pamphleteers, and poets who chronicled their evolution, The Other Paris is a book meant to upend the story of the French capital, to reclaim the city from the bons vivants and the speculators, and to hold a light to the works and lives of those expunged from its center by the forces of profit.


Praise For The Other Paris: The People's City, Nineteenth and Twentieth Centuries…

"The elevation of the obscure and the overlooked, the discarded or hidden or marginal, to artistic status or cultural prominence has become a cottage industry for artists and writers of late, but as an anti-ghostbuster, Sante is in a class by himself . . . the pleasures to be had from the fruits of his research are considerable . . . [The Other Paris's] great virtue is to send the reader down investigative paths of his own." —Molly Haskell, The New York Times Book Review

"'The city,' [Sante] insists, '—compact and curled within itself, a labyrinth—had to be played like a game.' This is an idea—I'll admit it—that I love, not just in regard to Paris but also to the very essence of urban life . . . Sante is highlighting the law of unintended consequences, which brings us back to dérive again. Throughout "The Other Paris," he invokes the figure of the flâneur, which is to say the one who walks to connect to the city through the soles of his or her feet . . . Here, we see the sneaky genius of The Other Paris, which, like Low Life, conceals the complexity of its structure, masquerading as a popular history . . . until it reveals that it has been about circling all along." —David L. Ulin, Los Angeles Times

“Sante’s knowledge of the voluminous Paris literature is prodigious . . . his great gift is his ability to draw on the ‘verbal photography’ of previous writers to send the reader back in time.” —Arthur Goldhammer, BookForum

“The Other Paris is both eulogy and paean to the matrixes of anarchy, creativity, crime, and serendipity that once gave shape to the City of Light.” —Anna Wierner, The New Republic

“[Sante] casts his lot with the ragpickers and streetwalkers, and his readers are better off for it.” —Dmitry Samarov, The Chicago Tribune

“[Sante] has written a wonderfully rich book, packed with information, lively in style, evoking the turbulence of a vanished time and city.” —Allan Massie, The Wall Street Journal

“Nowadays, the old, crowded, swarming, surly cities are at least half-forgotten. But in this great chronicle, Luc Sante recalls when Paris was rougher, when the poor, the tough, the unregulated, the underworld, thrived there; maybe the city was also less rough, in that there was room for nearly everyone all the way down the social ladder. Hanging over The Other Paris is the contemporary curse that perhaps hit Paris first, of cities that have become bland transnational stopping places for the privileged. Magisterial as ever, Sante returns us to the flavor, texture, savor, shouts, and clashes of the bygone city.” —Rebecca Solnit

"The good news is that Sante is a formidable guide to the Parisian past at ground and underground level . . . Sante ends his book with a hymn to flâneurie, this lazy meandering pursuit of truth, drink and other goals, like the literary archaeology of a city that’s no longer there. Following his path is worth the inevitable hangover." —David D'Arcy, San Francisco Chronicle

"Sante vividly captures this 'other' Paris . . . The Other Paris is immersive and enjoyable. The abundant pictures are fascinating." —Sarah Grant, Booklist

Luc Sante was born in Verviers, Belgium, and now lives in New York City. He is the author of Evidence, The Factory of Facts, and Walker Evans, and his work has appeared in The New York Review of Books, The New Republic, and Harper's, among other publications. He teaches writing and the history of photography at Bard College.
Loading...
or
Not Currently Available for Direct Purchase