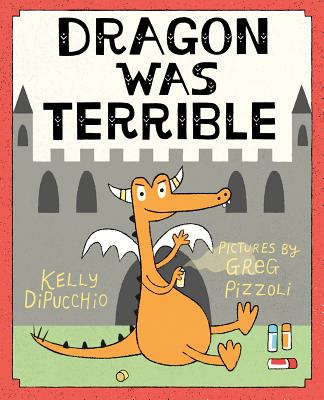 We all know dragons are terrible, but this one is especially terrible. He scribbles in books. He steals candy from baby unicorns. He even burps in church. Seriously, who does that? Dragon, that's who. The king, the knights, and the villagers are desperate to take down this beast once and for all. But sometimes it's up to the unlikeliest of heroes to tame a dragon this terrible.

Kelly DiPucchio likes her bacon well-done, served with two eggs over easy and a side of rye toast. She is an award-winning author of several children's books, including the New York Times bestsellers Grace for President and The Sandwich Swap. She lives with her husband and three children in southeastern Michigan.

Greg Pizzoli is an author and illustrator from Philadelphia, Pennsylvania. His credits include illustrating Not Very Scary.

Praise For Dragon Was Terrible…

In naive, flattened cartoons, Pizzoli mixes modern and medieval with aplomb as Dragon TP’s a castle and spray paints “Dragon was here” on a wall underneath a posted notice from the king promising a reward to whomever stops Dragon. These pictures, combined with DiPucchio’s clearly disapproving narrator make Dragon’s transgressions all the funnier. —PW

In this comical tale, one kingdom is fed up with its disobedient dragon. This book may seem like your classic “bad dragon gone terrible” tale, complete with a king, a castle, and knights, but the text and illustrations work together to offer readers a different story—one that is modern and timeless. Perhaps the book’s most remarkable feat is its ability to gently and humorously suggest alternative, peaceable methods for dealing with negative emotions and destructive behavior while also reminding readers of the cathartic power of a good story. This is one terribly good dragon tale that will leave readers laughing and with an appreciation for the healing power of a good book. —Kirkus starred review