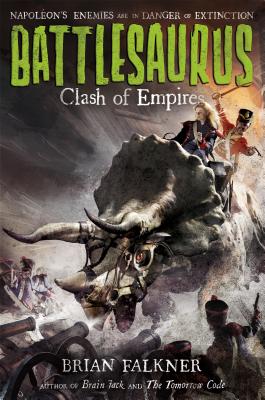 In this roaring alt-history adventure, dinosaurs from a forbidden world have been turned into unstoppable weapons by one of the most ferocious military leaders of all time: Napoléon Bonaparte. In the wake of his crushing victory at Waterloo, Napoléon unleashes his vicious French general Marc Thibault and his brigade of giant battlesaurs to strike terror across Europe. England stands alone, but an invasion is looming. Its only hope is a secret attack led by Willem, a magician's son, deep inside enemy territory, to the very heart of Napoléon's terrifying new army. In a stunning sequel to Brian Falkner's Battlesaurus: Rampage at Waterloo, deception and betrayal threaten the mission from its outset, but the courage and perseverance of Willem the "saur killer" and his compatriots lead to a clash of titanic proportions.

Praise For Battlesaurus: Clash of Empires…

“A stunning conclusion to [the Battlesaurus] duology . . . the dinosaur battles are terrific and should appeal to teen readers with a penchant for action and suspense.” —VOYA

“Part historical fiction, part dinosaur fantasy mash-up, this book will appeal to history buffs and dinosaur fanatics alike. The battle scenes between Napoleon's army and the British are depicted in incredible detail, making readers feel as if they are right in the midst of the fight . . . The first of a promising duology that readers will find thrilling and positively addicting.” —School Library Journal

“This alternative history asks, what if Napoleon won the battle at Waterloo . . . The novel quickly ramps up to suspense, immersing the reader in the swiftly moving plot. Characters are very well drawn, capturing the reader's sympathy. With an ending wide open for a sequel, complete with a plot-thickening cliff-hanger, one can only hope that Falkner is a swift writer.” —Booklist

Brian Falkner was born and raised in Auckland, New Zealand, and now lives in Australia. He is the award-winning, best-selling author of several action-adventure novels, including the Recon Team Angel series and Brainjack.
Loading...
or
Not Currently Available for Direct Purchase