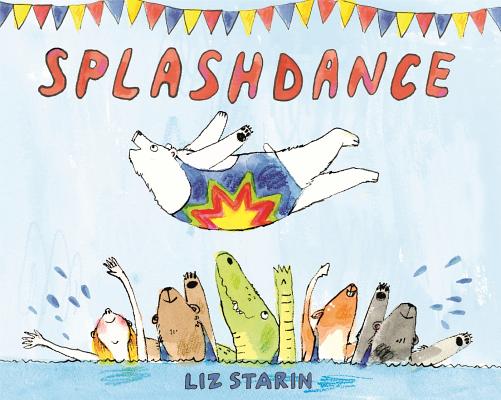 Ursula, a bear, and Ricardo, a human, are preparing for the water ballet competition, where the prize is a million dollars! But a new regulation at the community pool--no bears--leaves Ursula cut from the contest. Luckily, she encounters a group of undaunted animal swimmers at a local pond, and Ursula and her new team figure out a way to participate in the competition and make sure everyone is welcome at the pool once and for all. Filled with deadpan humor, adorable animals, and big themes about social justice and inclusion, Liz Starin's picture book Splashdance is a fun and splashy summer story with a lot of heart.


Praise For Splashdance: A Picture Book…

“What starts as a loopy tale about an interspecies water ballet competition gradually reveals itself to be a call for solidarity and resistance in the face of injustice . . . Ursula, with her ability to turn personal betrayal into collective triumph, may remind adult readers of the heroines of ShondaLand.” —Publishers Weekly, starred review, "Best Summer Books 2016"

“The straightfaced silliness of the premise guarantees laughs, but there’s also real tenderness . . . The use of bears as this world’s scapegoat and the randomness of their ban may give kids new insights into the concept of prejudice as well, and the book comfortably and capably mixes absurdity with pathos . . . Perfect for poolside reading or for storytimes about swimming, summer, or the Olympics, Ursula’s story is a real winner.” —The Bulletin of the Center for Children's Books

“A creative spin on inclusivity—an issue never before approached through agile polar-bear paw positions or the graceful lifting of camels in the air. Starin’s anthropomorphized cats, chickens, crocs, and more (along with amusing asides in the background) steal the show. It’s a consciously silly pretense, but discussion possibilities abound, and there’s no question it’s funny.” —Kirkus Reviews

“The message that loyalty and inclusiveness are important is a valuable one to share with children. Don’t hesitate to jump into this pool.” —School Library Journal

Liz Starin studied illustration at the Hochschule für Grafik und Buchkunst in Leipzig, Germany; the Rhode Island School of Design; and the School of Visual Arts and the Fashion Institute of Technology in New York City. Liz previously worked as an editor with Junior Library Guild. Now she works as an author, illustrator, and computer programmer. She lives in Brooklyn, New York. She also runs the children's book illustration blog Pen and Oink. penandoink.com and cargocollective.com/lizstarin
Loading...
or
Not Currently Available for Direct Purchase