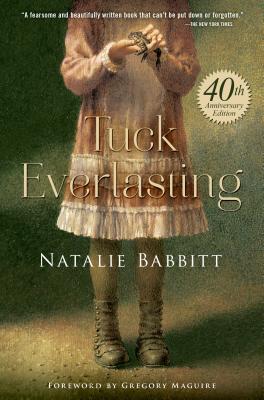 Blessed with—or doomed to—eternal life after drinking from a magic spring, the Tuck family wanders about trying to live as inconspicuously and comfortably as they can. When ten-year-old Winnie Foster stumbles on their secret, the Tucks take her home and explain why living forever at one age is less of a blessing than it might seem. Complications arise when Winnie is followed by a stranger who wants to market the spring water for a fortune.

A brand-new introduction from Gregory Maguire, the author of Wicked, and additional bonus materials make this special edition of Natalie Babbitt's Tuck Everlasting a must-have for lovers of the book and a great way to introduce a new generation to a classic. This title has Common Core connections.

Artist and writer Natalie Babbitt (1932–2016) is the award-winning author of the modern classic Tuck Everlasting and many other brilliantly original books for young people. As the mother of three small children, she began her career in 1966 by illustrating The Forty-Ninth Magician, written by her husband, Samuel Babbitt. She soon tried her own hand at writing, publishing two picture books in verse. Her first novel, The Search for Delicious, was published in 1969 and established her reputation for creating magical tales with profound meaning. Kneeknock Rise earned Babbitt a Newbery Honor in 1971, and she went on to write—and often illustrate—many more picture books, story collections, and novels. She also illustrated the five volumes in the Small Poems series by Valerie Worth. In 2002, Tuck Everlasting was adapted into a major motion picture, and in 2016 a musical version premiered on Broadway. Born and raised in Ohio, Natalie Babbitt lived her adult life in the Northeast.

“A fearsome and beautifully written book that can't be put down or forgotten.” —The New York Times

“With its serious intentions and light touch the story is, like the Tucks, timeless.” —Chicago Sun-Times

“Rarely does one find a book with such prose. Flawless in both style and structure, it is rich in imagery and punctuated with light fillips of humor. The author manipulates her plot deftly, dealing with six main characters brought together because of a spring whose waters can bestow everlasting life. . . . Underlying the drama is the dilemma of the age-old desire for perpetual youth.” —The Horn Book Magazine

“Probably the best work of our best children's novelist.” —Harper's

“Natalie Babbitt's great skill is spinning fantasy with the lilt and sense of timeless wisdom of the old fairy tales. . . . It lingers on, haunting your waking hours, making you ponder.” —The Boston Globe

“This book is as shapely, crisp, sweet, and tangy as a summer-ripe pear.” —Entertainment Weekly

“Beautiful and descriptive language is the strength of Babbitt's fantasy about Winnie and her encounter with the Tuck family, who cause her--and readers--to ponder an important question: What would it be like to live forever?” —Booklist