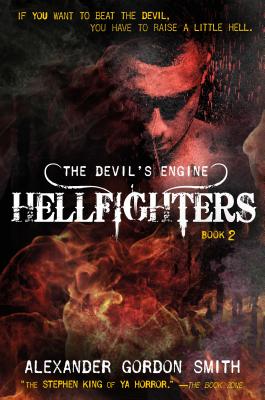 In Hellraisers, he made a demonic deal. Now, in this sequel, The Devil's Engine: Hellfighters, it’s time to pay the price.

Thrown into a relentless war against the forces of darkness, fifteen-year-old Marlow Green and his squad of secret soldiers must fight for control of the Devil’s Engines—ancient, infernal machines that can make any wish come true, as long as you are willing to put your life on the line. But after a monstrous betrayal, Marlow, Pan and the other Hellraisers find themselves on the run from an enemy with horrific powers and limitless resources—an enemy that wants them dead at all costs. Failure doesn’t just mean a fate worse than death for Marlow, it means the total annihilation of the world. And when all looks lost and the stakes couldn’t be higher, just how far is he willing to go?

In the second book of The Devil's Engine trilogy, Alexander Gordon Smith has written another of his signature thrilling, fast-paced Faustian horror story that turns the tables on the battle between good and evil.

“Adventure fans will be thrilled by the fast-paced, wall-to-wall action, and horror
readers will delight at the supernatural terror and gore in the Engineers’ battle against chaos and pure evil.” —Booklist

“Smith takes readers on another twisted, twisting journey and—to paraphrase the narrative—leaves readers with 'images that belong in the sickest of horror movies' . . . This brings the same fear, fire, and comic relief as its predecessor, and readers will be happy enough with this sequel to the first Faustian tale to look forward to the next one.” —Kirkus Reviews

Praise for The Devil's Engine series:

“Smith is an expert at balancing tension and hope, keeping the audience on the edge of their seats.” —Publishers Weekly

“The Stephen King of YA horror” —The Book Zone