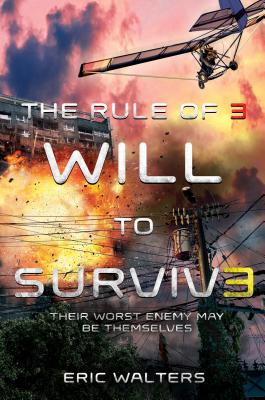 Here is the gripping conclusion to an acclaimed trilogy about one suburban neighborhood's existence after a global blackout. Teenager Adam Daley has killed again. It had to be done, part of him knows that, but murder changes a person. It can certainly change a kid who's already grown up too quickly, too harshly, in the wake of the catastrophic global shutdown four months ago. In the name of safety and survival, Adam and his neighbors have turned their middle American community into a fortress, defending against countless enemies. But what's lurking in the dark is a greater danger than ever before: somebody who wants to destroy the neighborhood and Adam at any cost. Soon, the hunted will have to become the hunter . . . and Adam hates himself for what he will have to do. Because sometimes even the dark is not cover enough for things that would never happen in the light.

Praise For The Rule of Three: Will to Survive…

“Fantastic, compelling, unforgettable! . . . Makes The Walking Dead look like a walk in the park, because the monsters howling outside your gates aren't the undead but your friends, your fellow students, your co-workers.” —Alexander Gordon Smith, author of the Escape from Furnace series

“It has been 66 days since the global blackout that rendered all technology useless. Adam and the denizens of his suburb community continue to follow Herb, the retired former government official. But as catastrophes escalate and Herb's decisions become increasingly questionable, the teen begins to wonder if they've put their trust in the wrong person. Plot twists and double alliances will keep readers guessing and coming for more in this riveting installment of the survival adventure series.” —School Library Journal

“The struggle for survival in a world suddenly bereft of technology continues . . . Ex-CIA Herb, however, warns that peace isn't just fleeting; it's deceptively dangerous . . . As the community's sole pilot and therefore crucial for surveillance and reconnaissance, Adam's all too aware that in this post-apocalyptic world, his community is an island of haves in a sea of have-nots. He struggles to help outsiders as much as possible and frequently argues against Herb's ruthless pragmatism . . . The philosophical questions and killer ending will prime readers for the next book.” —Kirkus Reviews

Eric Walters, a former elementary school teacher, is a bestselling children’s author in Canada. He is the founder of Creation of Hope, which provides care for orphans in the Makueni district of Kenya. His recent books include The Rule of Three series and Nothing to Fear.
Loading...
or
Not Currently Available for Direct Purchase