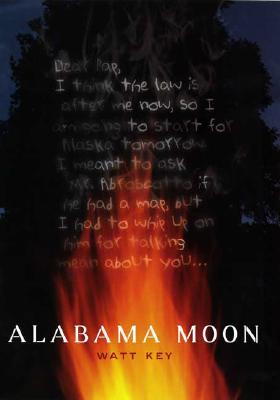 "I could trap my own food and make my own clothes. I could find my way by the stars and make fire in the rain. Pap said he even figured I could whip somebody three times my size. He wasn't worried about me."

For as long as ten-year-old Moon can remember, he has lived out in the forest in a shelter with his father. They keep to themselves, their only contact with other human beings an occasional trip to the nearest general store. When Moon's father dies, Moon follows his father's last instructions: to travel to Alaska to find others like themselves. But Moon is soon caught and entangled in a world he doesn't know or understand, apparent property of the government he has been avoiding all his life. As the spirited and resourceful Moon encounters constables, jails, institutions, lawyers, true friends, and true enemies, he adapts his wilderness survival skills and learns to survive in the outside world, and even, perhaps, make his home there.

In this compelling, action-packed book, Watt Key gives us the thrilling coming-of-age story of the unique and extremely appealing Moon.

Albert Watkins Key, Jr., publishing under the name Watt Key, is an award-winning southern fiction author. He grew up and currently lives in southern Alabama with his wife and family. Watt spent much of his childhood hunting and fishing the forests of Alabama, which inspired his debut novel, "Alabama Moon," published to national acclaim in 2006. "Alabama Moon" won the 2007 E.B. White Read-Aloud Award and has been translated in seven languages. Key's second novel, "Dirt Road Home," was published in 2010.

"Key writes honestly about hunting, trapping and the hardships of survival in this rather unusual coming-of-age story."  --Kirkus Reviews "Well written with a flowing style, plenty of dialogue, and lots of action."  --School Library Journal "Compelling."  --VOYA "Absorbing."  --Publishers Weekly "For boys who dream of unfettered life in the great outdoors . . .  Moon's a bona fide hero."  --The Bulletin of the Center for Children's Books