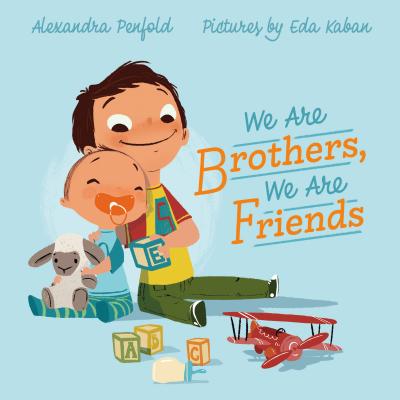 We Are Brothers, We Are Friends (Hardcover)

There are games to play and adventures to be had. And if trouble comes, it’s big brother to the rescue because there’s no better friend than a brother.

Alexandra Penfold is the author of Eat, Sleep, Poop!, illustrated by Jane Massey, and the co-author of New York à la Cart: Recipes & Stories from the Big Apple’s Best Food Trucks. She lives in Brooklyn, New York, with her husband and sons.

Eda Kaban is an illustrator of children’s books, including Old MacDonald Had a Truck written by Steve Goetz. Her work can be seen in print and galleries from San Francisco to New York. She was born and raised in Turkey and currently lives in San Francisco, California, with her husband.

Praise For We Are Brothers, We Are Friends…

“Alternating between the realistic setting of the children’s room and fantasy adventures, the retro, cartoon-style illustrations fill in many details of the boy’s ideas. Flat, bright colors with black details for contrast create humorous, appealing images. Full bleed two-page spreads allow readers to take in scenes at an unhurried pace.” —Booklist

“With simple, straightforward text addressed directly to the wide-eyed toddler, the older brother gamely lists the types of adventures they’ll have, from playing trains and planes and hide-and-seek to pretending to be dinosaurs. There is not a drop of sibling rivalry or animosity here. Penfold’s earnest story portrays a child who’s proud to be a big brother and takes his responsibilities seriously. . .Kaban’s playful cartoon art has a retro-modern vibe, with expressive facial features and cheerful energy.” —School Library Journal

“Sibling rivalry? What sibling rivalry? Penfold’s cheerful big brother narrator is totally cool with having a baby brother. He looks forward to ‘adventures, just the two of us,’ that include pretend play with ‘trains, and planes, and how to be a dinosaur.’ Most poignantly, he promises, ‘When you cry... I will hear you first.’ Kaban—whose crisp lines, bright colors, and eager-eyed characterizations bring to mind 1960s animation—builds some wonderful images from Penfold’s words.” —Publishers Weekly