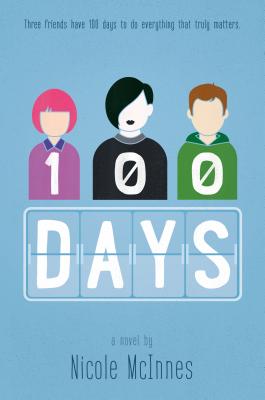 Agnes doesn't know it, but she only has one hundred days left to live. When she was just a baby, she was diagnosed with Progeria, a rare disease that causes her body to age at roughly ten times the normal rate. Now nearly sixteen years old, Agnes has already exceeded her life expectancy.

Moira has been Agnes’s best friend and protector since they were in elementary school. Due to her disorder, Agnes is still physically small, but Moira is big. Too big for her own liking. So big that people call her names. With her goth makeup and all-black clothes, Moira acts like she doesn’t care. But she does.

Boone was friends with both girls in the past, but that was a long time ago—before he did the thing that turned Agnes and Moira against him, before his dad died, before his mom got too sad to leave the house.

An unexpected event brings Agnes and Moira back together with Boone, but when romantic feelings start to develop, the trio’s friendship is put to the test.

"Three misfits whose friendship fell apart in the sixth grade rediscover their bond in high school. Each character is fully explored...A tender, often funny tale, this story's heartbreaking ending packs no less of a punch even though readers are prepared for it." —Kirkus

"Agnes, Moira, and Boone are likable, and readers will ache right along with the characters as they struggle with misunderstandings and preconceived notions.Rife with compelling contemporary issues, this novel delivers a heartfelt story to a diverse readership." —SLJ

"Even though the narrative is counting down to Agnes’ last days, the ending remains climactic and affecting." —Booklist

Nicole McInnes is an author, speaker, writing and literature instructor, animal lover, chocolate aficionado, and mom. Born and raised in the San Francisco Bay Area, she attended the University of California at Santa Cruz and Northern Arizona University. Nicole lives in the mountains of northern Arizona with her family. 100 Days is her second novel.
Loading...
or
Not Currently Available for Direct Purchase