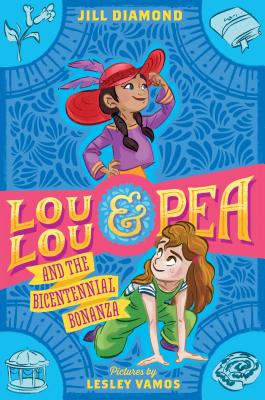 Lou Lou and Pea and the Bicentennial Bonanza

Lou Lou and Pea and the Bicentennial Bonanza is the second book in this young, illustrated middle-grade series by Jill Diamond, about two best friends who must uncover historical secrets and save their city's festival.

BFFs Lou Lou Bombay and Peacock Pearl are busy preparing for the Bicentennial Bonanza, their city’s two-hundredth birthday bash! And this year, the party will take place in their beloved neighborhood of El Corazón. With a baking contest, talent show, and a new gazebo planned, the community can’t wait to celebrate the founders (and historical BFFs), Diego Soto and Giles Wonderwood. But when Vice-Mayor Andy Argyle claims the festivities belong to Verde Valley, using a mysterious diary as evidence, Lou Lou and Pea smell trouble. Will the friends be able to uncover the secrets of their city’s founding, and bring the Bonanza back to El Corazón?

"Fans of Lou Lou and Pea and the Mural Mystery will welcome this second adventure, but readers new to the series will not be at a disadvantage." —Booklist


Praise For Lou Lou and Pea and the Bicentennial Bonanza…

"Fans of Lou Lou and Pea and the Mural Mystery (2016) will welcome this second adventure, but readers new to the series will not be at a disadvantage." —Booklist

"With its soft illustrations, diverse cast of characters, and engaging and accessible style, this is an ideal recommendation for readers wishing to take the leap from simplistic chapter books to richer novels."—School Library Journal

Jill Diamond has loved children's literature for as long as she can remember, thanks to her school librarian mother and long, cold winters in Maine. She presently lives in San Francisco, where, when she's not writing, she practices law and hangs out with her husband and cat.

Lesley Vamos received a high distinction in BA Design at COFA with a special honorary award in animation, although she still holds a pencil incorrectly. She spends her time doodling, traveling, running her design and illustration business, and hanging out with her little family. She resides in Sydney, Australia. Lesley is the illustrator of Lou Lou and Pea and the Mural Mystery.
Loading...
or
Not Currently Available for Direct Purchase