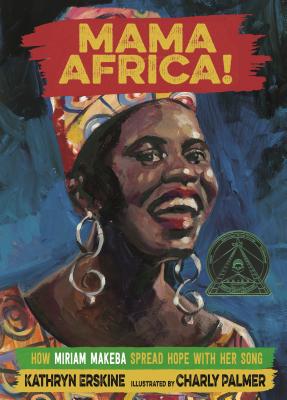 How Miriam Makeba Spread Hope with Her Song

Miriam Makeba, a Grammy Award–winning South African singer, rose to fame in the hearts of her people at the pinnacle of apartheid—a brutal system of segregation similar to American Jim Crow laws. Mama Africa, as they called her, raised her voice to help combat these injustices at jazz clubs in Johannesburg; in exile, at a rally beside Dr. Martin Luther King, Jr.; and before the United Nations.

Set defiantly in the present tense, this biography offers readers an intimate view of Makeba’s fight for equality. Kathryn Erskine’s call-and-response style text and Charly Palmer’s bold illustrations come together in a raw, riveting duet of protest song and praise poem. A testament to how a single voice helped to shake up the world—and can continue to do so.


Praise For Mama Africa!: How Miriam Makeba Spread Hope with Her Song…

"An excellent perspective from which American readers can learn about apartheid and one of the pioneers who fought it through her art." —Kirkus Reviews starred review

"Erskine’s prose style is expressionistic, with lyrical sentences that alight on significant events...Potent quotes and song lyrics keep the intensity high, as does the clever use of words in a fierce red, often repeated to begin the subsequent page, lending the text a driving propulsion." —The Horn Book starred review

Kathryn Erskine is the National Book Award–winning author of Mockingbird. She has also written Seeing Red, The Absolute Value of Mike, and The Badger Knight. She lived in South Africa for part of her childhood, and grew up listening to Miriam Makeba's songs. Mama Africa! is her first picture book.

Charly Palmer is a graphic designer, illustrator, and the Coretta Scott King John Steptoe New Talent Award winner for Mama Africa! As a child, he was fascinated by Ezra Jack Keats’s illustrations for The Snowy Day, which inspired Charly’s own use of color and geometric shapes. He studied art and design at the American Academy of Art and the School of the Art Institute, both in Chicago.
Loading...
or support indie stores by buying on