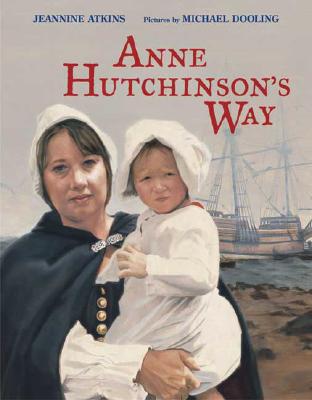 In 1634, young Susanna Hutchinson sailed from England with her family to the Massachusetts Bay Colony, where they hoped to practice their religion freely. But when Susanna’s mother, Anne, began to hold her own Scripture meetings at which she contradicted the minister’s teaching that God is stern and punitive, she was told to stop. Although threatened with banishment for disturbing the peace of the colony, Anne Hutchinson refused to be silenced, no matter the consequences.

The inspiring true story of one of our country’s first heroines is brought stunningly to life in oil paintings rich with historical detail. Anne Hutchinson's Way is a 2008 Bank Street - Best Children's Book of the Year.

JEANNINE ATKINS and MICHAEL DOOLING have previously collaborated on "Mary Anning and the Sea Dragon," an NCSS-CBC Notable Trade Book in the Field of Social Studies. The author lives in Whately, Massachusetts, and the illustrator in Audubon, New Jersey.

"Atkins is able to take the issue of religious freedom and make it personal . . . Executed in a photo-realistic style that makes long-ago events seem close."—Starred, Booklist

"Beautifully produced and constructed . . . Atkins tells a complex story of faith and freedom with clarity and strength."—Kirkus Reviews