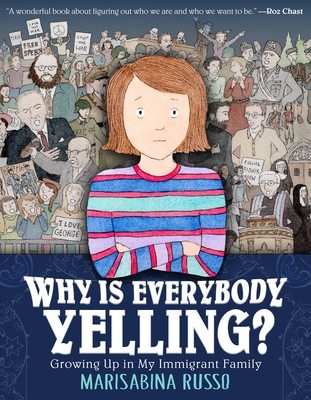 Why Is Everybody Yelling?

Growing Up in My Immigrant Family

“A wonderful book about figuring out who we are and who we want to be when we grow up. It’s also about being an American—especially a first-generation American.” —Roz Chast

This graphic-novel debut from an acclaimed picture book creator is a powerfully moving memoir of the author's experiences with family, religion, and coming of age in the aftermath of World War II, and the childhood struggles and family secrets that shaped her.

It’s 1950s New York, and Marisabina Russo is being raised Catholic and attending a Catholic school that she loves—but when she finds out that she’s Jewish by blood, and that her family members are Jewish survivors of the Holocaust, her childhood is thrown into turmoil. To make matters more complicated, her father is out of the picture, her mother is ambitious and demanding, and her older half-brothers have troubles, too. Following the author’s young life into the tumultuous, liberating 1960s, this heartfelt, unexpectedly humorous, and meticulously illustrated graphic-novel memoir explores the childhood burdens of memory and guilt, and Marisabina’s struggle and success in forming an identity entirely her own.


Praise For Why Is Everybody Yelling?: Growing Up in My Immigrant Family…

“Why Is Everybody Yelling? is a marvel. It is so compelling, I couldn’t put it down. It is a humorous, surprising, thoughtful look at identity, family, religion—life.” —Kevin Henkes

“An unvarnished look at one complicated, opinionated, and personality-filled family.” —The Horn Book, starred review

“Ably conveyed through the many frames that capture heated, hurtful exchanges, delivered with practiced nonchalance at family gatherings, by adults who will not, or cannot, abandon their dysfunctional communication. As readers observe Russo’s ten-year journey to young adulthood, they may admire her love for her querulous mother, but they’ll be mighty glad to see her finally move out and on.” —The Bulletin of the Center for Children's Books

“The meticulous, detailed art is a highlight, striking the perfect tone for the quirky character of the world it portrays and rewarding repeated readings to catch every detail . . . Affectionately celebrates Jewish American experiences.” —Kirkus Reviews

“Unflinching . . . Teachers, friends and Russo’s half-brothers are portrayed brilliantly, both in the meticulously rendered expressive illustrations, the authentic dialogue and the deeply moving internal thoughts. Embracing her Jewish identity is one outcome of Russo’s tumultuous journey through childhood and adolescence, but this life story is about forging an identity woven from many different threads . . . remarkable and uplifting.” —Association of Jewish Libraries

Marisabina Russo is the acclaimed author and illustrator of numerous books for young people including two picture books based on her family’s wartime experiences, Always Remember Me and I Will Come Back for You. Why Is Everybody Yelling? is her first graphic novel. She lives in Westchester, New York. marisabinabooks.com
Loading...
or support indie stores by buying on