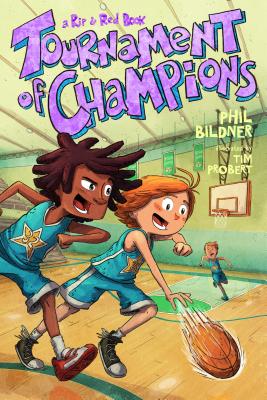 Tournament of Champions (Rip and Red #3)

It's spring of their fifth-grade year and Rip and Red have a thrilling opportunity to participate in a weekend basketball tournament with a few other members of Clifton United. While the tournament is only a short bus ride away, both boys will travel outside their comfort zones. Ultra-competitive Rip must play on a team with kids he doesn't like. But he faces an even bigger hurdle when someone from his past returns, someone he hasn't seen in years, someone who just may derail the entire weekend. As for Red, because of his autism spectrum disorder, he's never traveled anywhere without his mother. Will he muster the courage to take the trip? Fortunately for both boys, also on the team is an unlikely addition, a source of inspiration who helps everyone discover the true meaning of the word champion.

Tournament of Champions is the third book in Phil Bildner's Rip and Red series.


Praise For Tournament of Champions (Rip and Red #3)…

“Bildner's diverse cast of characters is what energizes this tremendously engaging story . . . Another solid volume in a fun and lively series.” —Kirkus Reviews

Rookie of the Year:

“This fast, fun read featuring characters who love books as much as basketball will appeal to sports fans and nonathletes alike.” —School Library Journal

“The book depicts the evolution of a group of fifth graders who learn a lot, grow a lot, and help one another . . . The charming and diverse characters [are] pure fun with a lot of heart.” —School Library Journal

“If the students are inspiring, so is [their teacher] Mr. Acevedo, who risks his job to do such radical things as reading aloud and encouraging free reading. (He's supposed to be preparing the kids to take tests!) Probert's cartoonish illustrations lend energy and personality to the likable cast of characters.” —Kirkus Reviews

“With its energetic and authentic story and artwork, this is a fresh, fun book about school, sports, and friendship.” —Children's Book Council