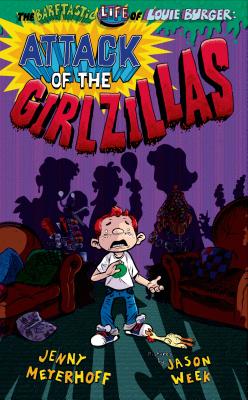 Attack of the Girlzillas (The Barftastic Life of Louie Burger #3)

For Louie Burger, things are going great in the fifth grade. He has two awesome best friends, Nick and Thermos, he's pretty much conquered his stage fright, and even mean ol' Ryan Rakefield isn't giving him as much flak. Yep, things are going pretty well.

That is—until his dad has to go away for two weeks for a job and he is stuck with a house full of girls. Suddenly, it's makeup, princess dogs, love notes from your kissy-faced grandma, and heart-shaped pancakes all the time. How can Louie be the man of the house when it is constantly under attack by girlzillas?

Jenny Meyerhoff's funny and sweet novel is packed with boy humor, a great school setting, and over fifty pieces of line art from the talented Jason Week. This is the third book in the series.