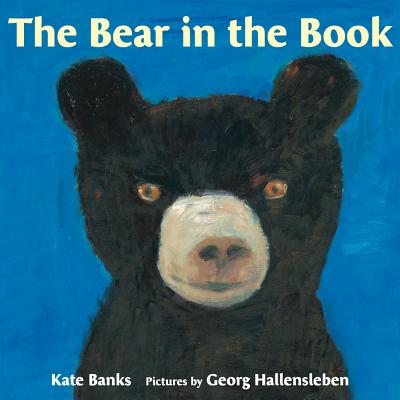 The Bear in the Book

It's time for bed, and a little boy chooses his favorite book for his mother to read to him. The bear in the book is preparing for his own deep slumber, hibernating through the winter while humans and other animals explore the snowy landscape around him. Just when the bear wakes up to greet the spring, the boy drifts off to sleep. Kate Banks' soft and rhythmic text is brought to life by Georg Hallensleben's strong, expressive paintings in this bedtime read that will carry young readers through the seasons.


Praise For The Bear in the Book…

“Coziness pervades every inch of 'The Bear in the Book,' a bedtime story by Kate Banks filled with Georg Hallensleben's sumptuously soft paintings. Words and images work together to create a marvelous Russian-doll effect: The person reading this book to a child is also, through the mother in the book, reading a story about a bear to a boy in the book--as well as telling the story of the hibernating bear. All three tales come to an end virtually simultaneously; the effect is enchanting.” —The Wall Street Journal

“In ‘The Bear in the Book,' readers are in the hands of two masters--Banks with her well-chosen words and Hallensleben with his lush, color-saturated paintings.” —The New York Times

“With its quiet, gentle tone, this is perfect for one-on-one bedtime reading as well as for introducing hibernation, sleep cycles, and seasonal change, but the engaging, double-spread pictures will please crowds, too.” —Booklist, starred

“As with previous bedtime books by these fine collaborators, short simple sentences create a tranquil, soothing air, while the lush textured oil paintings fill the pages with dense color. But the most valuable thing about this gem might be that it demonstrates a best practice, to the benefit of children and parents alike.” —School Library Journal, starred

“This is, quite literally, what reading with a child is all about.” —Publishers Weekly, starred

“A tribute to the power of books to connect and the love that parents everywhere show when they share books with children at the end of the day, this picture book is simply spectacular.” —Kirkus, starred

“This would of course make a fine bedtime story; it might also be interesting to use as a catalyst for discussion about the love of books and reading.” —BCCB

What can I say about me? That I was born in 1958 in a German town called Wuppertal and that I have two sisters. That I didn't like to go to school because I thought it was terribly boring and I preferred riding my bicycle in the woods, and drawing the landscapes I encountered.
I made drawing after drawing in the forest and in Bonn, the city where I lived, carrying with me on my bike a wooden case with all my art supplies inside: pens, inks, and watercolors, as well as a very small folding chair, so small that every time I got up after sitting on it for an hour my legs had completely fallen asleep, and I stumbled like an idiot, unless there was a fence to grab on to!

Even on vacations with my parents, I passed my time filling sketchbooks and sheets of paper with drawings and watercolors. For me it has always been the most natural thing to do. Almost all children draw, and, encouraged by my parents, I just never stopped.

The same year I finished school, I had my first solo exhibition in a gallery in Zurich, Switzerland. I had written a letter to an Austrian draftsman whose drawings I admired, Paul Flora, and he answered me with an incredibly friendly letter, along with a set of drawing pens, and even a drawing "just for demonstration." He showed my watercolors to his Swiss editor and gallery owner, and I received a letter just as my family was leaving on vacation, asking if I had ever exhibited, and if I would like to do so. I remember waiting hours for the right moment to show my parents the letter. I was so proud.

Soon after finishing school, I went to live in Italy, in Rome. I started drawing and painting more seriously there, and began showing my paintings. I met Kate Banks, who had already published several books she had written. I had always loved the idea of doing illustrations for children's books, and I had written a very simple story of my own, doing new versions of illustrations over and over for the same text. I had showed this at the children's book fair in Bologna, Italy, to a French publisher who seemed to like my illustrations. The story was set in the jungle, and when Kate saw the illustrations, she told me she had written a text that was also set in the jungle, and she asked me if I wouldn't like to try to do some illustrations for her story, which was called Baboon.

Since then we have created three picture books together. I really like to have someone to show my illustrations to, someone who asks me things like "Why don't you draw the lizard a little bigger?"

I always find it difficult to judge my own drawings, so each day when my fiancée, Anne, comes home from her work, she looks at what I've done. When she likes my work, I am happy, because her opinion is almost always right.

I always make many versions of the same illustrations and am lucky to have an editor who will call a halt to this, because a book eventually has to be printed. I always have technical problems, I think because I enjoy having them when I start to see how a certain paint works on a certain type of paper, I change them to see how a different combination might work. Thus I am hardly ever content with what I have done, and the moment a book is published I think what I could have done to make it better!

I lived in Rome, with some interruptions, for about twenty years. Last year, I moved to Paris, where I now live with Anne, and too many cats.