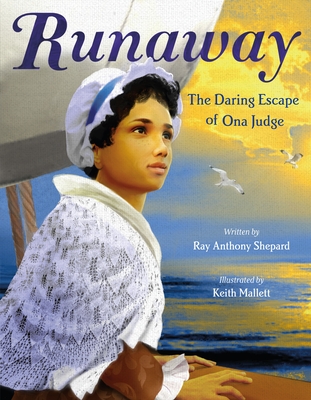 The Daring Escape of Ona Judge

A powerful poem about Ona Judge's life and her self-emancipation from George Washington’s household.

Ona Judge was enslaved by the Washingtons, and served the President's wife, Martha. Ona was widely known for her excellent skills as a seamstress, and was raised alongside Washington’s grandchildren. Indeed, she was frequently mistaken for his granddaughter. This poetic biography follows her childhood and adolescence until she decides to run away.

With extensive backmatter, this poem may serve as a new introduction to American slavery and Ona Judge's legacy.


Praise For Runaway: The Daring Escape of Ona Judge…

"With a distinctive, haunting voice, powerful images, and thought-provoking story structure, this unique look at a remarkable young woman’s life choices and decisions offers an utterly necessary but seldom highlighted perspective on the contradictions within our society’s foundations. A powerful antidote to whitewashed cultural mythology." —Kirkus Reviews, starred review

"A stunning picture book debut . . . an evocative portrait that keenly interrogates the structures upon which America is built." —Publishers Weekly, starred review

"A fine addition to all collections." —Booklist

"This is a moving complement to Dunbar’s Never Caught (BCCB 1/19) as well as a potent exemplar of scathing historical critique." —Bulletin of the Center for Children's Books (BCCB)

Ray Anthony Shepard is a former teacher and retired editor-in-chief of a major education publishing company. He is a graduate of the University of Nebraska College of Education and the Harvard Graduate School Education where he received a Martin Luther King Jr. Fellowship from the Woodrow Wilson Foundation. His books for children include Now or Never!: Fifty-Fourth Massachusetts Infantry's War to End Slavery and Runaway: The Daring Escape of Ona Judge.

Keith Mallett has been drawing and painting for as long as he can remember. As an artist and designer he has created posters and fine art prints for over thirty years. He lives in San Diego with his wife Dianne and his German Shepherd Pi. How Jelly Roll Morton Invented Jazz was his first children's book.
Loading...
or support indie stores by buying on