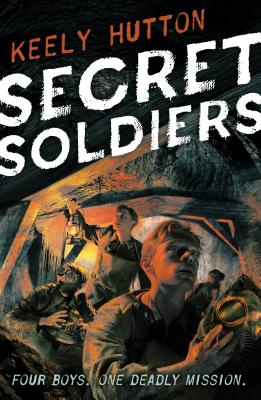 Over a quarter million underage British boys fought on the Allied front lines of the Great War, but not all of them fought on the battlefield—some fought beneath it, as revealed in this middle-grade historical adventure about a deadly underground mission.

Secret Soldiers follows the journey of Thomas, a thirteen-year-old coal miner, who lies about his age to join the Claykickers, a specialized crew of soldiers known as “tunnelers,” in hopes of finding his missing older brother. Thomas works in the tunnels of the Western Front alongside three other soldier boys whose constant bickering and inexperience in mining may prove more lethal than the enemy digging toward them. But as they burrow deeper beneath the battlefield, the boys discover the men they hope to become and forge a bond of brotherhood.

Secret Soldiers is another stunning story of strength, perseverance, and love from Keely Hutton.


Praise For Secret Soldiers: A Novel of World War I…

“The narrative seamlessly blends historical fact with the intense personal experiences of the four boys . . . A captivating tale of down-to-earth heroism and a personal exposé of life in the trenches from the perspective of likable, engaging characters.” —Kirkus Reviews

“Hutton has done an excellent job of capturing the claustrophobic condition of life underground, evoking the horror of WWI, and creating characters who are individual and fully realized. There is no secret that this is an excellent addition to the surprisingly scant literature of the First World War.” —Booklist

“The relationships among the main characters are well developed, and readers will particularly enjoy the camaraderie between the new recruits and the more experienced soldiers. Hutton engages readers from the first page with the sights, sounds, and vibrant feel of the era.” —School Library Journal

Keely Hutton is a novelist, educational journalist, and former teacher. She is the recipient of the Highlights Foundation Writers Workshop scholarship at Chautauqua. She has worked closely with Ricky Richard Anywar to tell his story in her first novel, Soldier Boy.
Loading...
or support indie stores by buying on