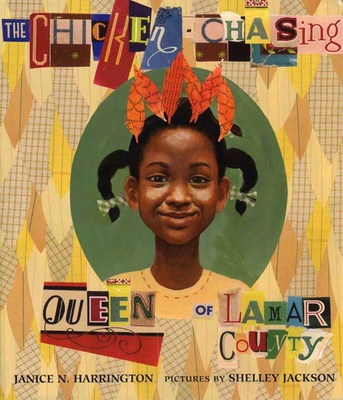 The Chicken-Chasing Queen of Lamar County

Meet one smart chicken chaser. She can catch any chicken on her grandmother's farm except one – the elusive Miss Hen. In a hilarious battle of wits, the spirited narrator regales readers with her campaign to catch Miss Hen, but this chicken is "fast as a mosquito buzzing and quick as a fleabite." Our chicken chaser has her mind set on winning, until she discovers that sometimes it's just as satisfying not to catch chickens as it is to catch them.

A fresh voice full of sass and inventive, bold collage illustrations full of surprises create a childlike escapade brimming with funny high jinks that leads the reader on a merry, memorable chase.

The Chicken-Chasing Queen of Lamar County is a 2008 Bank Street - Best Children's Book of the Year.


Praise For The Chicken-Chasing Queen of Lamar County…

“This book just begs to be read aloud, with long pauses to take in the complexity of the gorgeous half painted, half collage illustrations.” —Time Magazine

“Never has the expression "feathers will fly" been aptly illustrated as in this vivacious story.” —Starred, Kirkus Reviews

“Both words and pictures elevate a simple story about a girl's sly, barnyard game into a rollicking, well-told delight. A first-rate read-aloud.” —Starred, Booklist

“This funny story will have city kids longing for the chance to chase (and/or nurture) some chickens themselves.” —Starred, The Horn Book

“The mischief sings in every syllable fo this energetic tale . . . Harrington's storytelling style make the prose jump from page to ear.” —Starred, The Bulletin of the Center for Children's Books

Janice N. Harrington grew up in Vernon, Alabama. When she was eight years old, her family moved to Lincoln, Nebraska. A lover of stories both written and oral, she came to her interest in writing through childhood favorites such as Jane Eyre, Charlotte’s Web, and the Greek myths she came upon in an antiquated set of the Book of Knowledge encyclopedia.

Ms. Harrington received the Ezra Jack Keat’s New Writer Award for her first picture book, Going North. The book, which Kirkus Reviews called “gorgeous,” and School Library Journal described as “a solid choice for readers,” was named a Bulletin of the Center for Children’s Books Blue Ribbon Book, a Kirkus Reviews Editor’s Choice, and a Booklist Editors’ Choice. Her second picture book, The Chicken-Chasing Queen of Lamar County, has already received much acclaim, being selected for Fanfare, The Horn Book’s Honor List and named a Kirkus Reviews Editor’s Choice.

Ms. Harrington is also a nationally known storyteller who has been featured at the National Storytelling Festival, a widely published poet, and a children’s librarian with over twenty-two years’ experience as a youth advocate. She lives in Champaign, Illinois.

SHELLEY JACKSON is the author-illustrator of several picture books and author of adult fiction. She lives in Brooklyn, New York.
Loading...
or support indie stores by buying on