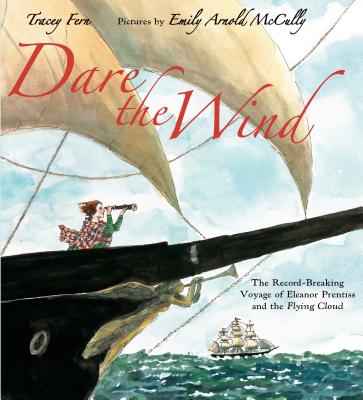 The Record-breaking Voyage of Eleanor Prentiss and the Flying Cloud

Ellen Prentiss's papa said she was born with saltwater in her veins, so he gave her sailing lessons and taught her how to navigate. As soon as she met a man who loved sailing like she did, she married him. When her husband was given command of a clipper ship custom-made to travel quickly, she knew that they would need every bit of its speed for their maiden voyage: out of New York City, down around the tip of Cape Horn, and into San Francisco, where the Gold Rush was well under way. In a time when few women even accompanied their husbands onboard, Ellen Prentiss navigated their ship to set the world record for speed along that route.


Praise For Dare the Wind: The Record-breaking Voyage of Eleanor Prentiss and the Flying Cloud…

“This book expertly describes Prentiss's early life, her love for the sea and the science of navigation, her marriage to Captain Perkins Creesy, and their remarkable accomplishment. Readers will find this fictionalized account gripping and inspiring.” —School Library Journal

“A lively, true story about a 19th-century woman and the 15,000-mile sailing journey she navigated. . . As stimulating as sea air itself, this story will surely send the salt water coursing through the veins of its readers.” —Kirkus Reviews, STARRED REVIEW

“From storm-tossed gray-green oceans and the white-icy waters around South America's southern tip to the tilting navigation room belowdecks, the story evokes the daring trip in all its glory, and the many perspectives of the often-majestic scenes bring readers aboard.” —Publishers Weekly, STARRED REVIEW

“This is a spirited and fascinating tale for landlubbers and sea-lovers alike.” —The Horn Book