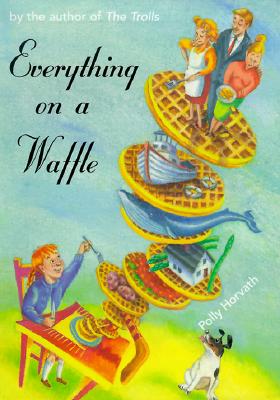 By the author of The Trolls, a National Book Award Finalist.

My name is Primrose Squarp. I am eleven years old. I have hair the color of carrots in apricot glaze (recipe to follow), skin fair and clear where it isn't freckled, and eyes like summer storms.

Readers will know right from the start that the narrator of Everything on a Waffle is going to tell her story straight and pull no punches. Primrose's parents have been lost at sea, but she believes without an iota of doubt that they are still alive, somewhere. She moves in with her Uncle Jack, but feels generally friendless. Her only real refuge is a local restaurant called The Girl on the Red Swing, where the owner, Miss Bowzer, serves everything on waffles -- except advice and good sense, which come free of charge and are always reliable.

Food in general plays an important role in Primrose's journey toward peace and understanding (a recipe dictated in her unmistakable voice is appended to each chapter), and readers will eagerly cheer her on through this funny, bittersweet novel.
Everything on a Waffle is a 2001 Boston Globe - Horn Book Award Honor Book for Fiction and Poetry and a 2002 Newbery Honor Book.


Praise For Everything on a Waffle…

*"Horvath (The Trolls) delivers another hilariously puckish read with this tale of a (possibly) orphaned girl from a small Canadian fishing village . . . A laugh-out-loud pleasure from beginning to triumphant end." --Starred, Publishers Weekly

Polly Horvath is the author of many books for young people, including "The Pepins and Their Problems," "The Canning Season" and "The Trolls." Her numerous awards include the Newbery Honor, the National Book Award for Young People's Literature, the Boston Globe-Horn Book Honor, the Vicky Metcalf Award for Children's Literature, the Mr. Christie Award, the international White Raven, and the Young Adult Canadian Book of the Year. Horvath grew up in Kalamazoo, Michigan. She attended the Canadian College of Dance in Toronto and the Martha Graham School of Contemporary Dance in New York City. She has taught ballet, waitressed, done temporary typing, and tended babies, but while doing these things she has always also written. Now that her children are in school, she spends the whole day writing, unless she sneaks out to buy groceries, lured away from her desk by the thought of fresh Cheez Whiz. She lives on Vancouver Island with her husband and two daughters.
Loading...
or
Not Currently Available for Direct Purchase