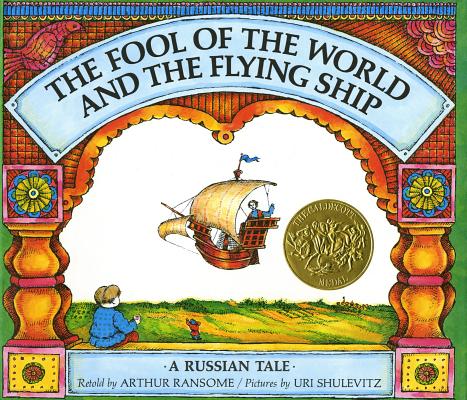 The Fool of the World and the Flying Ship

When the Czar proclaims that he will marry his daughter to the man who brings him a flying ship, the Fool of the World sets out to try his luck and meets some unusual companions on the way.

The Fool of the World and the Flying Ship is the winner of the 1969 Caldecott Medal.


Praise For The Fool of the World and the Flying Ship: A Russian Tale…

“A delightful picture-book version of the Russian folktale about the simple third son who, through the magical powers of the Listener, Swift-goer, Drinker, and others, performs the tasks set by the Czar and wins the princess. The handsome illustrations which fill the pages with animation and gleaming colors have a folk character and Russian flavor.” —Starred, Booklist

Arthur Ransome (1884-1967) was an English author and journalist, author of the Swallows and Amazons series and many other much-loved children's books.

Uri Shulevitz is a Caldecott Medal-winning illustrator and author. He was born in Warsaw, Poland, on February 27, 1935. He began drawing at the age of three and, unlike many children, never stopped. The Warsaw blitz occurred when he was four years old, and the Shulevitz family fled. For eight years they were wanderers, arriving, eventually, in Paris in 1947. There Shulevitz developed an enthusiasm for French comic books, and soon he and a friend started making their own. At thirteen, Shulevitz won first prize in an all-elementary-school drawing competition in Paris's 20th district. In 1949, the family moved to Israel, where Shulevitz worked a variety of jobs: an apprentice at a rubber-stamp shop, a carpenter, and a dog-license clerk at Tel Aviv City Hall. He studied at the Teachers' Institute in Tel Aviv, where he took courses in literature, anatomy, and biology, and also studied at the Art Institute of Tel Aviv. At fifteen, he was the youngest to exhibit in a group drawing show at the Tel Aviv Museum. At 24 he moved to New York City, where he studied painting at Brooklyn Museum Art School and drew illustrations for a publisher of Hebrew books. One day while talking on the telephone, he noticed that his doodles had a fresh and spontaneous look—different from his previous illustrations. This discovery was the beginning of Uri's new approach to his illustrations for The Moon in My Room, his first book, published in 1963. Since then he was written and illustrated many celebrated children’s books. He won the Caldecott Medal for The Fool of the World and the Flying Ship, written by Arthur Ransome. He has also earned three Caldecott Honors, for The Treasure, Snow and How I Learned Geography. His other books include One Monday Morning, Dawn, So Sleepy Story, and many others. He also wrote the instructional guide Writing with Pictures: How to Write and Illustrate Children’s Books. He lives in New York City.
or support indie stores by buying on