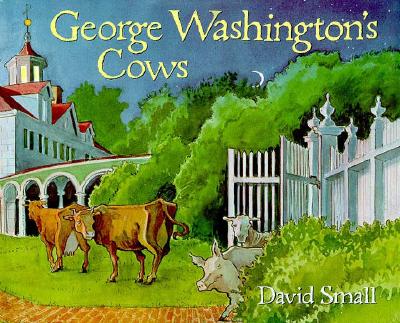 "George Washington's cows were kept upstairs,
And given their own special room.
They never were seen by light of day.
No matter for what or by whom."

These cows are just the beginning of George's problems. To be sure, his hogs are helpful around the house, but it irks Martha when their parties are better than hers. And then there are the sheep--all of them smarter than Tom Jefferson, with degrees (no to say "sheepskins") to prove it. What's a Father of his country to do?

David Smalll puts a hilariously sticky fingerprint on the well-polished veneer of American history, showing readers what really went on in the home of our first President.

"Small relates the trials and tribulations that face gentleman farmer George Washington. As he is forced to cope with extraordinarily fussy cows, dandified pigs, and intellectually superior sheep, it soon becomes apparent that the man is simply not cut out for country living, and he jumps at the chance to make a career change. The only thing funnier than this book's lighthearted, irreverent rhyme is its marvelous watercolor artwork."-Starred, School Library Journal