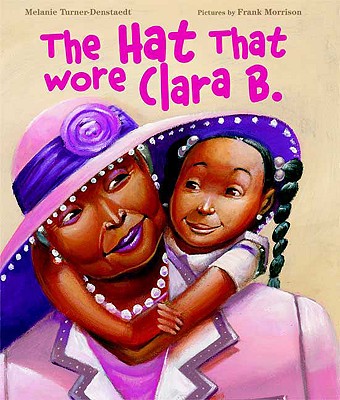 The Hat That Wore Clara B. (Hardcover)

On Mother’s Sunday at church, Clara B.’s grandma has the most beautiful hat of all the ladies. When people compliment her on it, she says, “Honey, I’m not wearing this hat. This hat is wearing me!” Clara B. likes to sit behind the hat in church and pretend it is wearing her. One day Clara B. decides that pretending isn’t enough, and she waits for her chance at the hat. But when the right moment comes along and she finally gets her hands on it, things don’t go exactly as she’d planned . . .

Exuberant illustrations by Frank Morrison perfectly capture a colorful African American Baptist tradition – and the special relationship between a girl, her grandma, and a big, bold, beautiful hat.

MELANIE TURNER-DENSTAEDT (1963-2007) lived in Upland, California, with her husband and five children. This was her first book. FRANK MORRISON has illustrated many books, including "Jazzy Miz Mozetta" by Brenda C. Roberts, for which he received the Coretta Scott King / John Steptoe New Talent Award. He lives in Atlanta, Georgia.

Praise For The Hat That Wore Clara B.…

“The illustrative oil paintings are at their best in the vivid crowd scenes: the pageantry in the African-American church, with the styles carrying from elders to youth is rich and glorious.” –Bulletin of the Center for Children’s Books


“A wonderful family story that celebrates the bond between generations.” —School Library Journal


“Morrison’s illustrations superbly complement the words, sequential panels drawing out Clara B.’s boredom as she waits for her opportunity, full-bleed spreads skillfully varying perspective and composition to tell the story, fine-tuned pacing leading up to the inevitable moment when Clara B. crushes Grandma’s hat.” —Kirkus Reviews