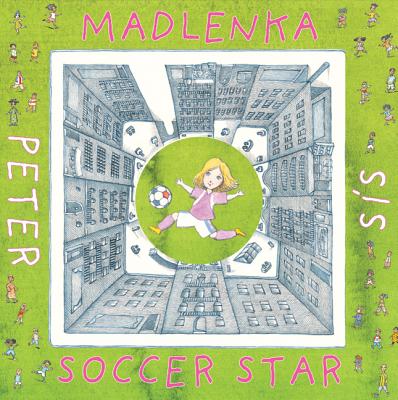 Madlenka -- that cosmopolitan little girl whose city block is a world of its own -- is back and ready to play When she dribbles her brand new soccer ball out the door and around the corner, it seems that everyone wants to get in the game -- the mailbox, a dog, even a parking meter, but especially all the neighborhood cats, and there are enough of them to make a team. But they're no match for Madlenka, who scores the winning goal.

“Imagination is everything, keeping Madlenka moving until the other children of the neighborhood begin to appear in the courtyard. A tribute to the pleasures of kicking a ball around, by yourself or with others.” –The Chicago Tribune

“Sis’s illustrations live up to his reputation, with the apartment buildings in muted shades of grey, standing protectively round the soccer field. A brief history of soccer follows the story of Madlenka, with a map of the countries where the sport is played, and with “soccer” translated into the word by which it is known in each country.” –San Francisco Book Review


“Madlenka's home remains a place that's at once familiar and fantastic, where no one, not even the trash cans, can avoid soccer fever.” –Publishers Weekly

“Sís cleverly fuses the ethnically diverse makeup of a Manhattan neighborhood with a fanciful scene of Madlenka and Cleopatra playing soccer with children from around the world.” –Horn Book

PETER SIS's two previous books about Madlenka, Madlenka and Madlenka's Dog, have won the hearts of children all around the world. Mr. Sis lives in New York City.
Loading...
or
Not Currently Available for Direct Purchase