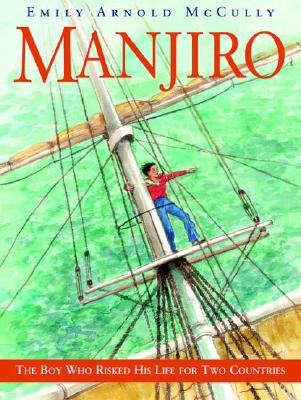 The Boy Who Risked His Life for Two Countries

In 1841, Japan had been closed to the outside world for 250 years, and anyone who tried to return to the country after leaving it could be executed. So when the small fishing boat on which fourteen-year-old Manjiro was working was shipwrecked, he despaired of ever returning to his village. The captain of the American whaling ship that rescued Manjiro took a special interest in him, inviting him to come live in Massachusetts. There, Manjiro was treated like Captain Whitfield's son, and he began to feel as though Massachusetts was his second home. Still, he never gave up his dream of finding a way to return to Japan and see his mother again.

Watercolor illustrations bring to life the true story of a determined and resourceful young man whose intimate knowledge of two cultures later led him to play an important role in the opening of Japan to Western trade and ideas.

EMILY ARNOLD MCCULLY, a Caldecott Medalist, has written and illustrated many children's books, including "Marvelous Mattie "and "Squirrel and John Muir," both NCSS-CBC Notable Children's Trade Books in the Field of Social Studies, and, most recently, "The Escape of Oney Judge. "She divides her time between New York City and upstate New York.

Praise For Manjiro: The Boy Who Risked His Life for Two Countries…

“The historically rich text and the realistic watercolor illustrations capture Manjiro’s life and times—both in Japan and New England—making this a first-rate introduction to a relatively unknown young figure in Japanese-American relations.” —Kirkus Reviews

“A map, bibliography, and thumbnail photograph of adult Manjiro are inclusions that will make this title as welcome to social studies teachers as it will be to armchair adventurers.” —Bulletin for the Center of Children’s Books


“An exciting account of a pivotal period in U.S.-Japanese history.” —School Library Journal

“The story is well told and involving.” —The Horn Book