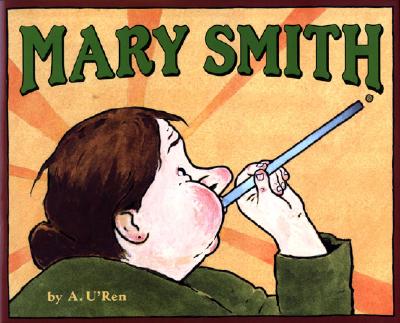 Time to get up!

Did you ever wonder how people woke up in time for school
or work in the days before alarm clocks? In the early twentieth century, townspeople in England hired "knocker-ups" like Mary Smith for a few pence a week. Mary Smith traveled through predawn streets armed with a peashooter and a pocket watch, waking her clients at whatever hour they requested by plinking dried peas at their bedroom windows.

In rollicking words and pictures, Andrea U’Ren re-creates one busy morning in the life of her intrepid true-life subject – a morning when Mary Smith helps her town start its day in timely fashion, only to receive a rude awakening when she comes home. Could it be that the knocker-up’s own daughter has been sleeping in? Mary Smith is a 2004 Bank Street - Best Children's Book of the Year.

"U'Ren unearths a fascinating tidbit from the past...This seamless blend of fact and fiction joins the likes of Sarah Wilson's Three in a Balloon in lighting up a morsel of strange-but-true history." --Starred, Kirkus Reviews

"U'Ren's London has the hearty, old-fashioned styling of early-20th-century illustration...her compositions are fresh and modern, merging with the semi-nostalgic style for a distinctive, appealingly quaint mood." --Publishers Weekly

Andrea U'ren is also the creator of "Pugdog "("Good dog," praised "Kirkus Reviews"). She lives in Portland, Oregon.
Loading...
or
Not Currently Available for Direct Purchase