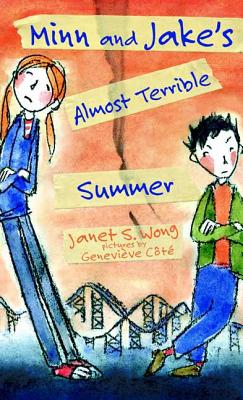 There are a few things / about your best friend
that you can only learn / when you see where he's from.

Minn knew / that Jake was from the city.
But she didn't know / that his grandmother was Korean.
That he liked taking bubble baths. / That his brother, Soup,
might be an eating champion. / That Jake was a cheater,
and that he had a . . . / girlfriend?!

There are some things / about your best friend
that it's better not / to know.

Bouncing free verse and playful black-and-white illustrations combine to make this a charming follow-up to Minn and Jake.

Minn and Jake's Almost Terrible Summer is a 2009 Bank Street - Best Children's Book of the Year.

“This is a gentle, resonant story that explores the ways we struggle to learn about one another, and discover ourselves in the process.” —Booklist

“Côté's black-and-white cartoons nicely highlight the action and, together with the text, capture the very essence of childhood summers. Good fun.” —Kirkus Reviews

“Wong is still a keen interpreter of the preteen psyche, deftly exploring such issues as the perceived exoticness of ethnic identities, the ethics of line-cutting, and the almost insurmountable odds against nurturing friendship between a very tall girl and a very short boy.” —Bulletin of the Center for Children's Books

Janet Wong was born in Los Angeles, California and grew up in Southern and Northern California. During her junior year in college, she lived in France, studying art history at the Universite de Bordeaux. When she returned from France, Janet founded the UCLA Immigrant Children's Art Project, a program focused on teaching refugee children to express themselves through art. Janet graduated from UCLA, summa cum laude, with a B.A. in History and College Honors. She then obtained her J.D. from Yale Law School, where she was a director of the Yale Law and Technology Association and worked for New Haven Legal Aid. After practicing corporate and labor law for a few years for GTE and Universal Studios Hollywood, she chose to write for young people instead.

Janet's poems have been reprinted in many textbooks and anthologies, as well as in some more unusual venues. "Albert J. Bell" from A Suitcase of Seaweed was selected to appear on 5,000 subway and bus posters as part of the New York City Metropolitan Transit Authority's "Poetry in Motion" program, and poems from Behind the Wheel have been featured on a car-talk radio show.

Janet's awards include the International Reading Association's "Celebrate Literacy Award," presented by the Foothill Reading Council for exemplary service in the promotion of literacy. She also has been appointed to the Commission on Literature of the National Council of Teachers of English. Janet's first two books have received several awards including the prestigious Stone Center Recognition of Merit, given by the Claremont Graduate School's Stone Center for Children's Books.

Geneviève Côté was born in Montreal in 1964. For as long as she can remember, she has always wanted to be an illustrator. It seemed considerably easier than becoming an astronaut, which was her second choice.

Over the last fifteen years, she has illustrated a wide variety of subjects—serious, funny, or frankly bizarre—for publications like The New York Times, the Boston Globe and Utne Reader. She has also worked for various advertising agencies in Toronto, Montreal, and Melbourne. Illustrating children’s books, however, is what she loves best of all.

Her work has appeared in Communication Arts, Print, Critique, and American Illustration, and has earned her several awards.

She lives in Montreal, Quebec.