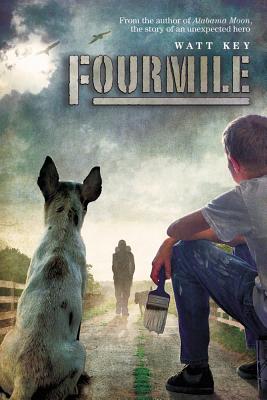 Twelve-year-old Foster knows in his gut that Dax Ganey, the man dating his widowed mother, is a bad seed. Then a mysterious stranger arrives at their Alabama farm, a former Army Ranger in Iraq rambling across the country, and Foster believes he has found an ally against Dax. The stranger proves a fascinating mentor, full of wisdom and secrets. And Dax soon has reason to resent not just him and Foster but also Foster's mother. A spurned Dax will be a dangerous enemy, but Foster is increasingly aware that the stranger is just as dangerous, if not more so.

From the author of one of the most highly acclaimed children's survival adventures of the last decade comes this tautly wound new novel reminiscent of classic westerns, about a boy caught in the middle of a clash that may turn out to be his own battle to fight.

Albert Watkins Key, Jr., publishing under the name Watt Key, is an award-winning southern fiction author. He grew up and currently lives in southern Alabama with his wife and family. Watt spent much of his childhood hunting and fishing the forests of Alabama, which inspired his debut novel, Alabama Moon, published to national acclaim in 2006. Alabama Moon won the 2007 E.B. White Read-Aloud Award, was included on Time Magazine's list of the Best One Hundred YA Books of All Time, and has been translated in seven languages.

“[STARRED REVIEW!] Key has crafted another powerful, riveting coming-of-age tale . . . Foster's first-person voice is richly authentic as he gradually acquires the wisdom that will eventually lead him to a believable though heart-wrenching resolution to some of the crushing conflicts in his life. Confrontations between Dax and Gary are vivid and violent enough to disturb some readers, the violence expertly serving to define yet distinguish their characters. Deeply moving and fast-paced, this life-affirming effort is a worthy addition to the bookshelves of sturdy readers.” —Kirkus Reviews

“Simultaneously poignant and suspenseful, the story will keep readers on the edge of their seats.” —School Library Journal, starred review

“Written in the tradition of classics such as Old Yeller and Shiloh but with a decidedly contemporary setting and tone, this will appeal to a broad range of readers.” —BCCB