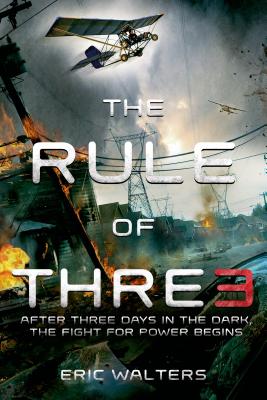 One shocking afternoon, computers around the globe shut down in a viral catastrophe. At sixteen-year-old Adam Daley's high school, the problem first seems to be a typical electrical outage, until students discover that cell phones are down, municipal utilities are failing, and a few computer-free cars like Adam's are the only vehicles that function. Driving home, Adam encounters a storm tide of anger and fear as the region becomes paralyzed. Soon—as resources dwindle, crises mount, and chaos descends—he will see his suburban neighborhood band together for protection. And Adam will understand that having a police captain for a mother and a retired government spy living next door are not just the facts of his life but the keys to his survival, in The Rule of Three by Eric Walters.


Praise For The Rule of Three…

“A fantastic, compelling, unforgettable book! Its simple premise--what if one day all modern technology stopped working--becomes a blisteringly fast tale of survival in a world gone to hell . . . This book makes The Walking Dead look like a walk in the park, because the monsters howling outside your gates aren't the undead but your friends, your fellow students, your co-workers.” —Alexander Gordon Smith, author of the Escape from Furnace series

“There's no zombie plague or nuclear war--a computer virus destroys modern technology, and people do the rest . . . The detailed content is more than worth it, capturing the nitty-gritty of rebuilding--and defending--civilization. Perfect for aspiring doomsday preppers and survivalists.” —Kirkus Reviews

“The most impressive and wonderful thing about The Rule of Three was how real it felt . . . Walters has done so good of a job showing what our actions would be like I may actually look into a bunker! Seriously.” —ReadSleepRepeat blog

“The story is filled with action, battles on land and in the air, and is very exciting. There is even a little bit of romance as Adam and Lori get to know each other . . . I can't wait for more books to find out what happens to our group of survivors.” —GoodReads post, five stars

“Rule of Three maintains a realistic and frightening look at what happens when technology is lost and modern society begins to fall apart.” —School Library Journal

“A solid fit for fans of Pfeffer's Life As We Knew It, this disaster-survival story will also please readers who just enjoy watching teens take the lead.” —BCCB

Eric Walters, a former elementary school teacher, is a bestselling children’s author in Canada. He is the founder of Creation of Hope, which provides care for orphans in the Makueni district of Kenya. His recent books include The Rule of Three series and Nothing to Fear.
Loading...
or
Not Currently Available for Direct Purchase