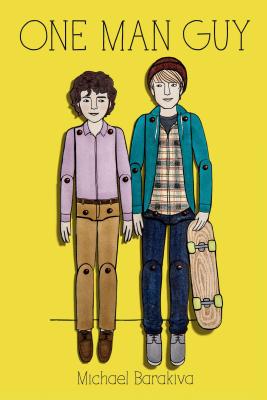 Alek Khederian should have guessed something was wrong when his parents took him to a restaurant. Everyone knows that Armenians never eat out. Why bother, when their home cooking is far superior to anything "these Americans" could come up with? Between bouts of interrogating the waitress and criticizing the menu, Alek's parents announce that he'll be attending summer school in order to bring up his grades. Alek is sure this experience will be the perfect hellish end to his hellish freshmen year of high school. He never could've predicted that he'd meet someone like Ethan.
Ethan is everything Alek wishes he were: confident, free-spirited, and irreverent. When Ethan gets Alek to cut school and go to a Rufus Wainwright concert in New York City's Central Park, Alek embarks on his first adventure outside the confines of his suburban New Jersey existence. He can't believe a guy this cool wants to be his friend. And before long, it seems like Ethan wants to be more than friends. Alek has never thought about having a boyfriend—he's barely ever had a girlfriend—but maybe it's time to think again.
Michael Barakiva's One Man Guy is a romantic, moving, laugh-out-loud-funny story about what happens when one person cracks open your world and helps you see everything—and, most of all, yourself--like you never have before.

Michael Barakiva, author of One Man Guy, is a theater director and writer of Armenian/Israeli descent who lives in Manhattan with his husband, Rafael. He is a graduate of Vassar College and the Juilliard School, an avid cook and board-game player, and a soccer player with the New York Ramblers.

Praise For One Man Guy…

“Feel-good, bubblegum romance . . . hand this one to those who've already gone through Levithan's Boy Meets Boy and Kluger's My Most Excellent Year.” —BCCB

“The story will appeal to both young people who are just discovering their own sexuality and readers who enjoy a good budding romance.” —School Library Journal

“Barakiva's debut is well-wrought and realistic . . . and it's entertaining.” —Kirkus Reviews

“Barakiva avoids stereotypes and clichés to create a sweet portrait of nascent adolescent love between two boys growing up and finding themselves (with some help from nearby New York City).” —Publishers Weekly