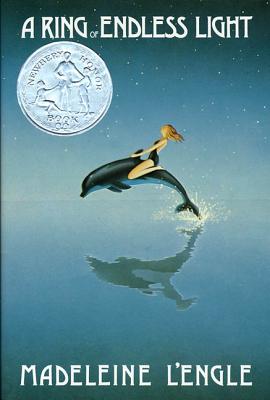 A Ring of Endless Light

In this award-winning young adult series from Madeleine L’Engle, author of A Wrinkle in Time, Vicky Austin experiences the difficulties and joys of growing up.

"This wasn't the first tie that I'd come close to death, but it was the first time I'd been involved in this part of it, this strange, terrible saying goodbye to someone you've loved."

These are Vicky Austin's thoughts as she stands near Commander Rodney's grave while her grandfather, who himself is dying of cancer, recites the funeral service.

Watching his condition deteriorate over that long summer is almost more than she can bear. Then, in the midst of her struggle, she finds herself the center of attention for three young men. Leo, Commander Rodney's son, turns to her as an old friend seeki comfort but longing for romance. Zachary, whose attempted suicide inadvertently cauesd Commander Rodney's death, sees her as the one sane and normal person who can give some meaning ot his life. And Adam, a serious young student working at the nearby marine-biology station, discovers Vicky, his friend's little sister, incipient telepathic powers that can help him with his experiments in dolphin communications.

Vicky finds solace and brief moments of peace in her poetry, but life goes on around her, and the strain intensifies as she confromts matters of love and of death, of dependence and of responsibility, universal concerns that we all must face. The inevitable crisis comes and Vicky must rely on openness, sensitivity, and the love of others to overcome her private grief.

Once again, Madeleine L'Engle has written a story that reveals in the drama of vividly portrayed characters and events the spiritual and moral dimensions of common human experiences.

A Ring of Endless Light is a 1981 Newbery Honor Book.


Praise For A Ring of Endless Light: The Austin Family Chronicles, Book 4…

“With customary grace and firm control of an intricate plot, L'Engle has created another irresistible novel about familiar characters, the Austin family. Vicky, 16, narrates the climactic events with Grandfather Eaton on a New England island, where he is living his last days.” —Publishers Weekly

“L'Engle has the magic storytelling gift that makes it a pleasure to lose yourself in her spell.” —Newsweek

“L'Engle writes eloquently about death and life with provocative passages that linger in the thoughts of the perceptive.” —Booklist, Starred Review