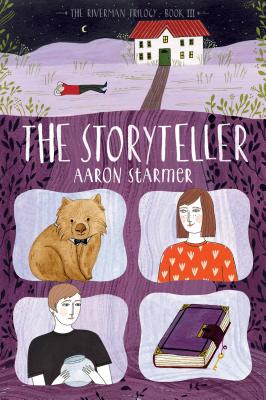 Keri Cleary is worried about her brother, Alistair. Everyone is worried about Alistair. As the one witness to a shooting, he has been shocked into silence. But everyone needs to know three things: Who shot Kyle Dwyer? Where is Charlie Dwyer? What does this all have to do with the disappearance of Fiona Loomis?

Perhaps the answers lie in stories. As Alistair makes strange confessions to his sister, Keri becomes inspired. She tells stories, tales that may reveal hidden truths, fiction that may cause real things to happen. In the concluding volume of the Riverman Trilogy, readers are asked to consider the source of inspiration, the borders of reality and the power of storytelling. They are asked to forgive monsters, to imagine alternate dimensions, and to believe in a phosphorescent wombat who assures us that gone for now is not necessarily gone for good.

Aaron Starmer was born in northern California, raised in the suburbs of Syracuse, New York, and educated at Drew University in Madison, New Jersey. His novels for young readers include The Storyteller, The Whisper, and The Riverman. He lives with his family in Stowe, Vermont.

Praise For The Storyteller: The Riverman Trilogy, Book III…

"A stunning and thought provoking conclusion to The Riverman Trilogy." —Booklist, starred review

"This coming-of-age novel is a thoughtful and nuanced exploration of the difficult transitions from childhood to adulthood. Fans of fantasy and realistic fiction alike will find something to love about this book, in which narrative ambiguity has never been so well leveraged. VERDICT This is a first buy for upper middle grade and YA collections, and a great recommendation for fans of the first two books as well as Orson Scott Card’s Ender’s Game or Madeleine L’Engle’s A Wrinkle in Time." —School Library Journal, starred review