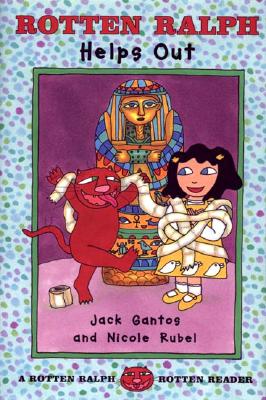 "Rotten Ralph is one cat who can make reading fun for kids. And he does!" --Marc Brown

Sarah needs a topic for her school project on ancient Egypt. Her rotten red cat, Ralph, thinks history is a bore. Only after he spoils a research trip to the library does Ralph decide to help. According to Sarah, the ancient Egyptians believed cats were wise and had special powers. And Rotten Ralph knows he can prove them right!

Jack Gantos and Nicole Rubel published their first book, "Rotten Ralph," in 1976. They launched the Rotten Ralph Readers in 2001 with "Rotten Ralph Helps Out." In addition to the Rotten Ralph books, Jack Gantos is the author of "Hole in My Life," a memoir that won the Michael L. Printz and Robert F. Sibert Honors, "Joey Pigza Swallowed the Key," a National Book Award Finalist, and "Joey Pigza Loses Control," a Newbery Honor book. He lives with his family in Boston, Massachusetts. Nicole Rubel's many books include "Twice as Nice: What It's Like to Be a Twin" and "Grody's Not So Golden Rules." She lives in Aurora, Oregon.

"Fans of Gantos's irrepressible Ralph who are ready to graduate from picture books will eagerly leap into this early chapter book, the first installment of the Rotten Ralph Rotten Reader series." --Starred, Publishers Weekly "Rotten Ralph's bouncy, semi-bad behavior and amusing antics have been delighting children for years in the long-running series . . . Now the irrepressible Ralph has moved on to 'Rotten Ralph Rotten Readers' in this upper-level easy reader with an Egyptian theme . . . Rubel's flat, stylized illustrations in full color are a natural complement to the Egyptian style of art, and she adds a good deal of additional information on ancient Egyptian culture through her illustrations." --Kirkus Reviews

"The text's short sentences and dialogue are basic enough for new readers while imparting plenty of interesting facts about the Egyptians." --Booklist