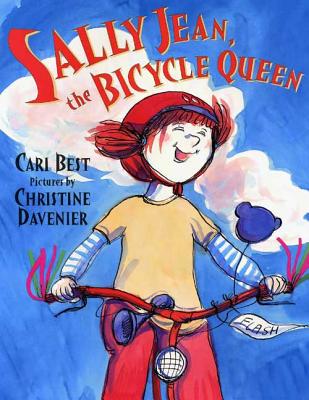 I can pop a wheelie, I can touch the sky,
I can pedal backwards, I can really fly!

Sally Jean was born to ride. And her bicycle, Flash, is just about her best friend. But one day something terrible – and wonderful – happens. Sally Jean grows. Suddenly she finds herself too big
for Flash. What's a Bicycle Queen to do? Finally, by collecting old bicycle parts to make a new bike – and giving Flash to a young friend who longs for a bigger bike of his own – she rides
again!

With exuberant art that's just the right match for Sally Jean's new found freedom, this joyous text celebrates growing up, learning new skills, and giving back to the community.

Sally Jean, the Bicycle Queen is a 2007 Bank Street - Best Children's Book of the Year.

“A rousing tale of resourcefulness that is just right to share with readers of both genders.” —Kirkus Reviews

“Davenier's spontaneous, ebullient watercolors . . . capture the irresistible qualities of a little girl who knows how to make things happen.” —Booklist

“Renders the exuberant joys of mobility so visible.” —The Chicago Tribune