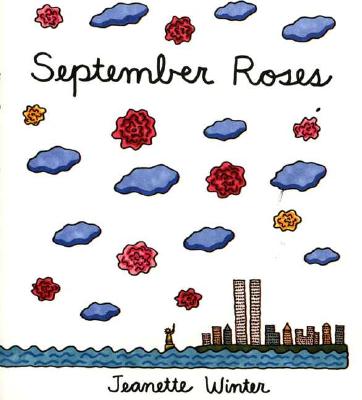 A tribute to the memory of September 11

On September 11, 2001, two sisters from South Africa are flying to New York City with 2,400 roses to be displayed at a flower show. As their plane approaches the airport, a cloud of black smoke billows over the Manhattan skyline. When they land, they learn of the terrorist attack on the World Trade Center. All flights are canceled; the sisters cannot go home, and they are stranded with boxes and boxes of roses.

In the days that followed September 11, Jeanette Winter was drawn to Union Square and saw, among the hundreds of memorial offerings, twin towers made of roses. In the pages of this small and vibrant book, she tells a moving story.

" In time for the third anniversary of the September 11th tragedy, Winter presents as a memorial the story of a memorial created at the time. Winter's controlled line-and-water color illustrations gain additional order from careful uses of patterning in unexpected places, giving the visuals a dignified restraint. It's a modest and tender account of a short-lived memorial that will last long in memory."
-- Bulletin of the Center for Children's Books

"Among the many memorials to 9/11, this small, spare narrative, spun from a true encounter, stands out for the power of its simple words and images. Winter doesn't shy away from depicting the destruction, but it's the sense of shock and loss in the aftermath, of shared grief and compassion, that comes through most strongly and makes the tale so inexpressibly moving."
-- Starred, Kirkus Reviews

"Winter's effective use of color underscores the sense that simple acts of kindness can bring a ray of light to even the darkest day. Her sensitive portrayal, tinged with hope, makes this one of the most effective books...with which to approach youngsters concerning this complex event." -- Starred, Publishers Weekly

Jeanette Winter is the author and illustrator of many notable books for children, including "Beatrix" and "Emily Dickinson's Letters to the World, " a "New York Times Book Review "Notable Children's Book of the Year. She lives in New York City.
Loading...
or
Not Currently Available for Direct Purchase